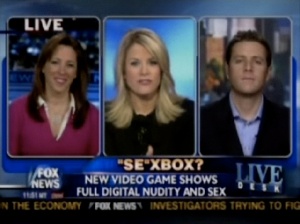 I am an advocate for gaming. I sing the praises of its potential to educate, to create empathy, to entertain and to allow players to virtually experience worlds that would otherwise be inaccessible. Gaming is a collaborative experience between your imagination and your body, a rare medium that allows you to simulate the immersion of things which most of us will never enjoy without risk of injury or repercussion. We can postulate the what-ifs of our individual experiences ("What if I'd been a pilot?" "What if I were mayor?" "What if I commanded an army?") to the broader hypotheses of our culture ("What if the British had pursued Washington in the winter of 1776?" "What if the Roman Empire had continued to thrive?" "What if aliens invaded tomorrow?") The potential of video games is limitless, and their value understated in a culture that is, at best, grudgingly accepting of their existence.

And yet, like so many media-fueled discussions of the past decade, the debate over the place of gaming in Western society has been forfeited to the extremes on both sides. We gamers, like any group with a cause, rally around our collective effort, and often find ourselves marginalized by those who don't understand us or the technology we support. We've seen it with Mass Effect vs. Fox News, with Jack Thompson vs. violent videogames and even as far back as the U.S. Congress versus the videogame rating systems. We watch as presidential candidates trumpet poor science and ambulance chasers in the interest of "protecting the children." It's hard to fight the urge to wage the battle for public perception at the fringes, but to do so would be a trap.

What strikes me about the public debate on gaming is how little work our adversaries have to do to make us look bad. If anything struck me about Geoff Keighley's appearance in defense of Mass Effect earlier this year, it was how normal he seemed, finally making the prosecutors seem out of touch rather than the defense. Every time someone with an agenda wants to make gamers look bad, there are a legion of people apparently willing to fill the role. Sure, Jack Thompson and Fox News look like classless hacks with a chip on their shoulder, but we're not doing much better with our response.

The debate over integrating videogames into mainstream culture is a discussion that deserves to be met in the middle, and as frustrating as that is to some, it means that we gamers need to give as much ground as we gain. We need to accept that there are legitimate concerns, even if they don't seem that way to us, about the effect of violent media on children, and that even in the face of being unfairly singled out, the truth is that the gaming industry does contribute some pretty gruesome imagery into the cultural landscape. It is not simple-minded for people to be concerned about the effects of such media, and the science is inconclusive at best.

As a father of one, soon to be two, there are many games that I would never play in front of my son, just as there are television shows I won't watch in front of him and music which I don't think is appropriate for him to hear. I don't support the idea that legislation is the solution to the question of children and violent videogames, particularly any legislation that doesn't address other forms of violent media with equal measure, but I also recognize the need to find common ground with those who want games like Condemned 2 or even Halo 3 restricted to adults only. It's not an unreasonable request.

It's not hard to imagine how parents can be manipulated into trusting groups with benign sounding names about family and ethics .How easy it must be to paint gamers as social malcontents when our loudest defenders are so quick to lower themselves to those expectations. We have a choice when called out by agenda-wielding extremists to either fight back with the same harsh rhetoric or to move instead toward the open middle where the vast majority of people live, and it seems like we fall into the same trap every time. We vociferously tear down Jack Thompson or Fox News or the conservative driven institutions without seeing that our fierce rebuttals only serve to make us look worse.

Not every fight is won by domination, and gamers will struggle against the tide of public opinion as long as we come off as strident and unyielding. The past few years have seen a surge in the public presence of videogames, a softening of gaming's image with products like the Wii and Rock Band and the expansion of the casual market, opening up the industry to new consumers. The public has perhaps never been so willing to accept the social place of gaming, and I hope the industry recognizes the opportunity and begins to field its all-star team to support our shared pastime.

The videogame industry must find a way to drown out those who fit the stereotypes, who post poorly spelled threats in public discourse, who can barely string together a coherent thought that isn't laced with expletives.

What we need are game designers, publishers and executives to speak to issues that legitimately concern parents and civic leaders rather than hide from them. We need the people who make videogames to seem less like socially inept shut-ins, and more like the guy next door with two kids and an IT job. The strongest ammunition that gaming opponents bring to bear on us is not science but the perception that gamers are different and dangerous. When we can tackle that issue head on by commonly responding with voices like Geoff Keighley rather than some caricature of The Comic Book Guy, then we're already halfway home.