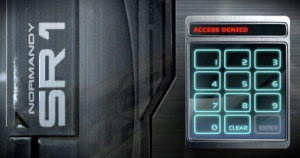 [Editor's note: Since the time of this article's writing, EA has formally announced they will forgo the updated SecuROM protection scheme for both Spore and Mass Effect in favor of a less invasive method.]

Early this week, a representative for Electronic Arts and Bioware revealed digital copyright protections for the upcoming PC release of Mass Effect, implementing a system similar to that used by the direct download version of Jade Empire. Upon first running the game, the DRM program authorizes the game's CD-key with a central server, and then reaffirms the legitimacy of the installation at the start of future gameplay sessions. If the executable goes more than 10 days without re-authorizing over the internet, the game will no longer play until this authorization occurs.

As a denizen of the internet, my first impulse upon hearing this was to set myself on fire in front of EA's Redmond headquarters. I also considered creating edgy YouTube ads where I hit my PC with a frying pan while shouting "this is your computer on DRM!" But, like a true gamer, I finally settled for writing fiery and inflammatory comments on message boards. As I perused the tone of responses beyond these hallowed walls, I realized that mine was sadly one of the more conservative and restrained reactions.

I allowed my temper to mellow and considered the decision with the calming effects of a good night's sleep (and mood altering pharmaceuticals). But I still found it no less a bitter pill to swallow. Their decision continues to distort the question of ownership, creating an arm of the company's will that extends to my computer and limits my legitimate use. I can at least be grateful that I now have $50 more of discretionary income to be spent elsewhere this month.

Some will care, some won't, and, to be perfectly fair, most will never even realize that anything controversial is happening. Still, the continued tightening of the noose around big-budget PC titles brings questions about the platform's long-term viability back into stark contrast against the comparatively hassle-free experience of consoles.

If we want to take a big logical leap across a chasm of reactionary hysterics into the realm of pondering "the death of PC gaming," which seems to be the thing to do these days, then let's at least be honest about the metaphor. PC gaming isn't dying; it's committing suicide. But I'm done trying to persuade PC publishers to take the Glock out of their mouth, because it's a complete fallacy. Even if they were to pull the trigger, there's a line of guys right behind them just waiting to fill the void. And frankly, the sob story of disillusioned developers petulantly storming from the PC camp as if consumers took their lunch-money and kicked sand in their faces is getting a little old. It's not that I contend there is no problem with piracy, or that the PC market is as durable as it once was. It's just that I'm tired of hearing developers bitch about it.

Besides, the idea that PC gaming could die, much less that it actually is dying, strikes me as dumb on a profound level. Say transition, say evolution, hell, you can even say that PC gaming has become inhospitable for the release of most AAA-exclusive properties, but we're talking about a platform with an install base in the tens of millions in the U.S. alone, home to success stories like World of WarCraft and The Sims. It's preposterous to imagine that that market will go completely untapped if Epic, Bioware or Crytek skip gaily toward that land of milk and honey called console development. I'm pretty confident that if Electronic Arts, Activision, Ubisoft and their ilk suddenly unleashed a total moratorium on PC gaming, there would be dozens of smaller companies more than happy to begin developing and marketing games for the platform. Considering how much time I've spent in the past few years with games like Sins of a Solar Empire, Mythos, Defcon or Armageddon Empires, to say nothing of Team Fortress 2, World in Conflict, World of WarCraft and Civilization IV, my rush to write the obit for the platform is non-existent.

If anything is stifling PC gaming, it's an endless array of console ports with restrictive DRM. If that's the dominant future of PC gaming, then I'd rather just see it dead. I'll concede that publishers clearly see piracy on the PC as a pervasive threat, but I'm not interested in making it my problem anymore.

That's not to say that I'm shifting all the way to the other extreme and declaring some kind of embargo on companies that include DRM. If that was the case, I might as well just drop my computer out the window and take up needlepoint. Even as it becomes clear that Electronic Arts is exploring this protection scheme as a permanent solution, I'll admit that while I won't be buying Mass Effect, I'll probably suck it up and buy Spore. But if publishers are going to shove more invasive user restrictions down my throat, then I'm holding game developers to higher standards of quality before I shell out my $50 for what is basically a glorified rental.