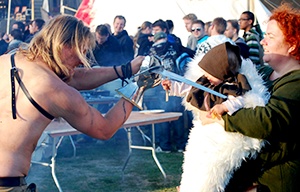 There are a few things that will always make for a great party: an abundance of free booze, an even ratio of guys to girls, music that's just on the threshold of too loud and an enclosed space that's nearly too crowded. Battle axes and serving wenches were never on that list for me - until last week.

Tomorrow, Norwegian developer Funcom will go live with Age of Conan: Hyborian Adventures, a fantasy MMOG set in the fictional universe of Robert E. Howard's Conan. Though it's poised as the next World of Warcraft killer, it's up against the most polished MMOG ever released, held aloft by millions of subscribers worldwide and one of the largest publishers in the world. The odds of Funcom wresting the top spot from Blizzard are about as likely as a fleet of Viking longships rolling into the port of Los Angeles and laying waste to Orange County - but that doesn't mean one can't hope.

It also doesn't mean that Funcom can't celebrate. With a development budget of more than $25 million, Age of Conan is reputedly the largest-scale entertainment property ever produced in Norway. In a country of less than five million pious Lutheran souls, many Funcom employees are prominent public figures, recognized and lauded in gathering places from supermarkets to mead halls. The company has even received government funding to partially finance a future project - Dreamfall Chapters, the third installment of Funcom's The Longest Journey series. It's clear that many Norwegians have a vested interest in the continued success of Funcom, and early numbers indicate that while Age of Conan might not be able to put more than a few cracks in the WoW monolith, it could soon find a few hundred thousand dedicated WoW players seeking asylum in Hyboria.

Which is what led me to hop on a plane from Durham, North Carolina, to Oslo, Norway. It wasn't the lure of an all-expenses-paid trip to a beautiful European city, nor the promise of more free beer than I could possibly drink in my 36-hour stay; but the opportunity to view first-hand how the Norwegian public, gamer and non-gamer alike, viewed the release of the first MMOG to challenge the deep-seated dominance of Irvine, California's own World of Warcraft. I found a mixture of curiosity, beautiful blond women, cautious optimism, cobblestone streets, excitement, Ringnes Pilsner, anxiety and fireworks.