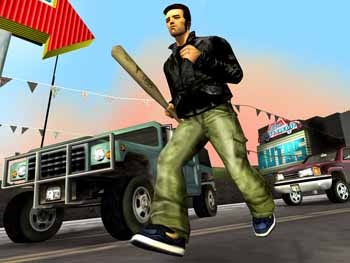 Face it; children are a mystery. Like so many superhero costumes delivered to us out of the blue by invisible alien benefactors, they arrive without instruction booklets, yet we're expected to somehow shape them into respectable wetware with no guidance other than a desire to avoid repeating the same mistakes that were made on us. As a trial-and-error process, parenthood ranks right up there with explosive ordinance disposal, piloting the space shuttle, and cobra wrangling; you really only get one shot at it, and personally, my money's on the cobra.

Back in 2001, a few days after the release of Grand Theft Auto III, I was busy plumbing the depths of the game's satirical wit and sandbox exploration when I was briefly called away to answer the phone, or a knock at the door, or some other irrelevant nonsense; realize only that one minute I was alone in the living room with my safely preoccupied three-year-old son and Grand Theft Auto, and the next I wasn't. The place was baby-proofed, to be sure, sockets covered, lead paint chips long since consumed by Test Child Alpha (sorry to see him go, really), so it was generally acceptable for the offspring to remain alone for no longer than one-point-seven-six minutes with a maximum parental separation radius (MPSR) of eighteen feet. Any longer than that and Misadventure would not only court Disaster, but they'd soon find themselves waking up together in a seedy motel room, all vodka-eyed and disturbingly devoid of memory. I returned well within the established time limit, never letting the top of his round, Charlie Brown head out of my sight. Father of the year, I.

So imagine my dismay - indeed, my blithering horror - when I discovered that the little opportunist had stealthily discarded his Blue's Clues Sing-A-Long Radio in exchange for my PS2 controller, and was happily tooling around the streets of Liberty City. Had I returned to find him slurping tequila-lime Jell-O shots off Dora the Explorer's exposed midriff, I would have been slightly less mortified.

I reached for the controller in one of those closed-loop, slow-motion eternities of parental relativity in which I had sufficient time to not only contemplate the nature of the Universe, but also to extrapolate the exact chemical compositions of Spam and Joan Rivers. (One has fewer preservatives. Take a guess.) Imagine jumping on the back of a tortoise in Seattle to stop a friend in Miami from making a horrible mistake, say, downloading Boom Boom Rocket, and you'll have an idea of the maddening suspense.

I was about to leap in front of the screen, all Secret Service-style, to shield him from the most vile wickedness perpetrated upon humanity since four guys gathered in a garage somewhere and called themselves White Lion, but then I glanced at the TV and stopped for a moment. Not only was he driving around Liberty City, he seemed pretty good at it, taking care to maneuver past the other cars when he could, but also making a special, painstaking effort to avoid pedestrians. It was a bit touch-and-scream for a while there, as the concept of braking seemed to elude him as thoroughly as does the concept of putting away his toys, but on the whole he did a pretty good job.

Intrigued, I did what any unsupervised dad would have done in that situation; I let him play. And I watched.