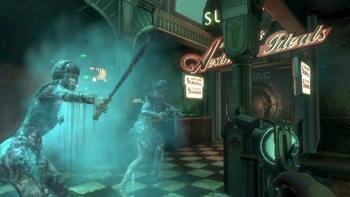 As I catalog the games I've played over the summer months, it occurs to me that perhaps these dry gaming seasons aren't the curse we take them to be. Right now, my gaming oscillates between BioShock on the PC, which I picked up for a song on Steam, World of WarCraft, the outstanding Braid on XBLA, Fallout and Psychonauts on GameTap, with Call of Duty 4 on deck waiting for the attention it so richly deserves.

Despite consecutive weeks of largely disappointing releases, counterpointed by the occasional Soulcalibur 4 or Civilizaiton: Revolution, the truth is that I don't have much difficulty finding something worth playing even without a steady flow of AAA releases. From fantastic downloadable content on consoles, to summer deals and cheaper used prices for games I missed last year, to games that never run out of style, summer gaming is like that pair of comfy old sneakers, familiar and easy to get into.

Here are a few reasons why we should embrace the slow and turgid summer gaming season.

Price - BioShock, which I picked up during one of Steam's weekend sales, was installed onto my waiting PC for the dirt cheap price of about $15. In an age where we gather virtual pitchforks and torches to assault the capitalistic pig-dogs of greedy publishing houses, it is worth taking note how quickly a $60 product can shed 75% of its price tag.

Publishers are all about the first two weeks of release, and usually after that they are just looking to match the price point to a model that moves product. While we may love the autumn and winter months for their endless parade of new and shiny games, my bank account can only sustain so many direct hits before it's sunk. But six months later, the industry seems happy to sling data at discount prices.

Stability - Early adopters don't just suffer high prices. They suffer bugs, incompatibilities, patches, DRM issues and the headaches associated with products lacking that fine veneer of spit polish that can only come from customer feedback. From a gameplay perspective, there is perhaps no more significant advantage to late adoption than the opportunity to play a game that has been tightened, polished or even expanded.

Imagine the cornucopia of potential content for people just now buying into the Rock Band phenomenon. Imagine how little trouble I had with my PC version of BioShock compared to the DRM train wreck of launch. With patches, expansion packs, user generated content and better functionality, the consumer satisfaction of picking up a six month old game is exponentially greater than being first in line on day one.

Coupled with the previous point you have better product at lower prices. Sign me up.

The Mysteries of the Bin Brendan Main 71 Comments