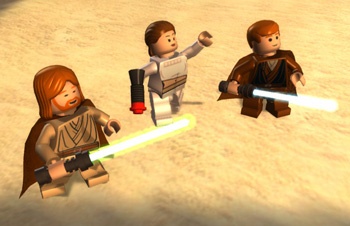 As I write these words, my five year old son is skirting the Millennium Falcon across the face of the Death Star, taking out turbo laser emplacements and waves of Tie fighters that explode harmlessly into adorable Lego pieces when dispatched. While not quite faithful to the canon - Han Solo is in this instance the hero of Yavin IV as opposed to Red 5 - is acceptable alternative fiction even for a crusty old Star Wars fan like myself.

The game is, of course, Lego Star Wars, and it is the latest shared gaming experience I've enjoyed with my son, in what I hope is a persistent gaming trend: kid-friendly games that aren't terrible.

Along with being a consummate executive gamer with all the tedious industry watching and abject snobbery that goes with it, I also try to be a dedicated and informed parent. I'm very conscious of the games I play in front of my son, and my exploits in the violent spaces of Halo, Gears of War or BioShock are strictly reserved for the thin and dark hours of the night when impressionable minds slumber. Historically, this meant that playing games was a relatively lonely and isolating experience.

But, as the connections between my son's eyes and hands develop into finely tuned conduits, I have begun to explore how gaming can be a shared time between us. I was hesitant at first, largely convinced that games sophisticated enough to be interesting for me would be beyond his reach, and those that he could wrap his brain around would be treacle most foul, an endless parade of tediousness spewed from that nonsense he's inclined to watch on Nick Jr. And, about the quality of that pabulum, I was right. He owns at least a couple of Dora the Explorer and Go Diego Go games that are at best simplistic and at worst condescending.

As I had suspected, what annoyed me most about the games widely marketed to his admittedly young age group is that they all talked down to him as though he were patently stupid. This is a kid passionately interested in space, in dinosaurs, in cars, football and humor, and what these games offered was some nonsense about the moon breaking into a number of pieces that Diego must save from ecologically significant biomes, all the while shouting commands like "Say Hola! Louder!".

It's fair to ask how Star Wars is significantly better, and certainly learning about the eating habits of a Tapir is more educational than traipsing about the Death Star as a comically animated Lego Luke Skywalker. But, we spend a king's ransom on his education and I'm not sure that I want videogames or television taking on the education part of my job. It's ok, I think, to let children be entertained without educational value, particularly as long as I live up to my job of providing guidance. In fact, I think there's far more value in sitting down and spending a half hour playing together even in a nonsense world than dropping my son in front of mediocre edutainment and mistaking it for quality time.

Gallery of the Day: 8 Star Wars Videogames From The Past DrStrangelove 25 Comments

That Game I Should Have Liked Shamus Young 79 Comments