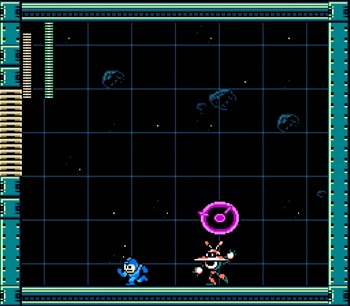 I sat practically hanging off the couch, my neck craned as if some invisible object blocked my view of the TV, with thumbs digging into the controller like it was a rabid squirrel I had to forcibly pacify through its eye sockets. Both Galaxy Man and I were down to our last slivers of health, but he still bounced around the room like a hyperactive, overweight 12-year-old in an inflatable playground. Finally, I sensed my window of opportunity. I lifted off the couch, leaned even closer to the screen and said a silent prayer for victory.

And then it was over.

The modulated, high-pitched ringing was both distant and deafening. With a mixture of horror and disbelief, I watched my body disintegrate into a dozen throbbing circles that rippled outward from the center of the screen. Within these circles were my broken dreams, my deepest insecurities, my most irrational fears. Galaxy Man didn't just destroy me; he showed me how inadequate I was. And I hated him for it.

I hated his frisbee-shaped head and Mickey Mouse hands. I hated his black hole-spewing abdomen. I hated his non-susceptability to gravity and his inexplicable vulnerability to concrete. But most of all, I hated him for wasting my time.

So I did what any cool-headed, sensible, productive member of society would do: I cussed out my television. It was enough to give me a moment's pause. Here I was, alone in my apartment, not communicating my frustration to spectators but merely venting a deeply illogical yet all-consuming rage at an inanimate object.

Four more hours of failure punctuated by brief moments of triumph have only reinforced the above experience. Simply put, Mega Man 9 is the hardest game I have played in years. I can safely say that after killing eight bosses and making my way through two of Wily's stages, I have tasted subtle, complex variations of failure that I had heretofore only imagined. Mega Man 9 has made me a connoisseur of failure.

But every mistake is an opportunity for learning, and every agonizing death in Mega Man 9 brought me closer to a profound truth: Videogames have messed with my head.

The seed of self-awareness was planted when I caught myself in another involuntary cursing fit after dying in the same spot three times in a row. I tried to picture how the scene would appear to a neutral third party; here I was, willfully (and repeatedly) submitting myself to an experience that was, by all outward appearances, deliberately painful.

But when I finally managed to reach a checkpoint or kill a boss, my success glittered like a diamond in a coal mine. Game theorists like Nicole Lazarro and Raph Koster have deemed this sensation "fiero," an Italian word describing the feeling of victory against near-insurmountable odds. It's a potent combination of pride and relief that only manifests when a game is insanely hard.