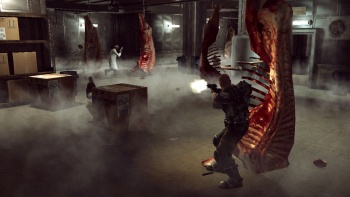 Forget the marketing hype: Games about videogames are nothing new. The Sega Genesis had Kid Chameleon, wherein you rescue your schoolmates from a virtual-reality arcade game gone haywire by taking on the persona of various gaming tropes, from samurai to superhero. And earlier this year, RedLynx released Reset Generation for the Nokia N-Gage, allowing you to play as one of 10 game-industry clichés, from the hyper-aggressive Hedgehog to an XP-hungry Level 50 Elf. For such a young medium, videogames have produced plenty of clichés.

That's pretty fertile ground for parody, but until now few developers have been interested in poking fun at their own livelihood. Enter Eat Lead: The Return of Matt Hazard, the latest project of North Carolina developer Vicious Cycle Software. Billed as a "comedy third-person shooter," Eat Lead tells the story of washed-up videogame character Matt Hazard as he attempts to revive his flagging career after a number of eerily familiar missteps (including Haz-Matt Karts, the obligatory karting spin-off). Hazard himself is a parody of any number of the gun-toting "shoot first, ask questions later" stereotypes, from Duke Nukem to Serious Sam.

Last week, we visited Vicious Cycle's new offices - about 10 minutes from The Esacpist's global HQ - to get an early glimpse at the developer's first attempt at a AAA title. Perhaps the biggest announcement at the event was that Eat Lead would feature the voice-acting talents of Will Arnett and Neil Patrick Harris. As Arrested Development's Gob Bluth, Arnett has perfected the art of misguided machismo, and NPH has reinvented himself playing characters that are way too easy to hate. Hopefully the material will live up to these actors' reputations.

The level we saw looked like it could have been pulled directly from Stranglehold and Red Dead Revolver. The first half took place in a kitchen/meat locker, where players can take cover behind food carts and hanging slabs of beef. Later, players enter a Wild West scenario, complete with enemies that spawn into the game world by pushing past a pair of virtual saloon doors. Along the way, you fight cooks, generic henchman (who spout lines like "I'm too old for this crap") and zombies.

Yes, zombies and Wild West outlaws in one level. If it seems a little hyperactive, that's probably the intention.

Eat Lead is very self-consciously a videogame; enemies materialize and disappear with Matrix-like animations, and bits of neon-blue code spew from enemies instead of blood. You're also assisted by a mysterious voice named Q.A. (which no doubt stands for something other than "quality assurance"), the Cortana to Hazard's Master Chief, who warns you of upcoming enemies and helps guide you through the game world. Whether she's an underpaid, overworked college dropout like her namesakes remains to be seen.

From the brief demo we saw, it's clear that Eat Lead relies heavily on its humor to deliver an original experience to players. The cover system will be immediately familiar to anyone who's spent time with Uncharted, save for a new feature that Vicious Cycle has developed that allows players to move from one cover point to another through a point-and-click mechanic. It looks a bit choppy at the moment, but the game is still in its early-alpha stages, meaning there's plenty of time in the schedule for the developers to polish and perfect it. Still, it's hard to get a sense of how big the laughs will be when characters deliver their lines through closed mouths - the alpha build lacked facial animations, which will obviously be present in the final product.

What we saw looked promising, but as with any hands-off preview, it's too early to tell whether Eat Lead will be a must-play title or simply Last Action Hero: The Videogame. Expect more information to follow as we get closer to the game's Q1 2009 release.

Jordan Deam was tempted to write a byline about bylines, but decided that would be a little too "meta."