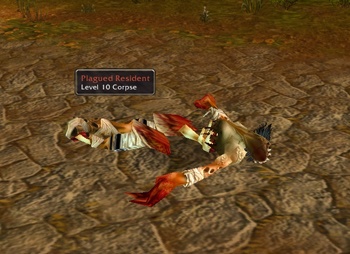 I am driven by patterns, comfortable in the habits that make each day predictable. Traditionally, I resist change that defies my plans. I am not equipped, for example, to deal with airport delays, unexpected traffic or sudden interruptions in my workflow. My wife can fly by the moment, adapt quickly and easily to fluid situations, but I am a creature of the itinerary and vulnerable to the colossal domino effect that can plunge me into chaos.

So, when I was suddenly turned into a zombie while going about my merry business both to my surprise and dismay, I was a prime candidate for being less than gruntled. And, many people just like me, World of WarCraft players all of them who over two years have developed rigid schedules of play, were similarly surprised when Blizzard unleashed a zombie infestation into even the most sacrosanct corners of the world. The event has divided the community of players into camps, those who reveled in the uncertainty of a too certain world, and those who had neither the time nor inclination to be interrupted from their normal game already in progress.

Hisorically these camps have split into divisions about the role of player-versus-player conflicts, and each side seems polarized into diametrically opposite perspectives. From the chaos-driven camp comes derisions of care-bear players who seem unable to deal with the multiplayer aspect of massively multiplayer virtual spaces, and resistance to the idea of being artificially neutered in what is clearly an online war. From the "care-bears" there is a desire to play the game, explore the world, and invest time into a knowable quantity without being impeded by the often harsh malfeasance of those who see multiplayer gaming as a prime opportunity to ruin someone's day.

Myself, I trend toward the latter camp, seeing an MMO not as a game with a mandate to interact but the option. More often than not, I will spend my time as a mercenary for hire, an automaton to the fickle wills of factionalized quest givers who create artificial justifications for rampant murder. It is a role I am comfortable with, dealing out death to whatever supposed enemy or threat will net me maximum coin and experience.

For the most part, this gameplay style relies on the predictability of the world. It expects that when I return to the quest giver to turn in the pureed spleens of twelve ghouls that he will be there to complete our transaction and go about doing whatever it is that these people do with spleens, not be lying dead at the end of some oafish cur's dagger. I am simply not interested in going about my business only to be randomly smote by the godlike avatars of pre-teen malcontents, and I do understand the resistance to suddenly being the victim of a zombie plague interrupting a world in equilibrium.

So, imagine, if you will, the scene. You've had a busy day of butchering fantastic something-or-others for the baubles they carry either in pockets or obscene orifices. You return to your home city to auction off your baubles in a ceaseless effort to inflate your bank account, only to find upon entering the auction house that it is plagued with ravenous zombies. If you have reliably been going into an entirely zombie-free auction house for a number of years, the adjustment to suddenly being accosted by the undead is a dramatic one.