This week in gaming history (December 14-December 20), we have a double dose distraction ready to keep your mind off the quickly approaching holidays. We'll start off by taking a look back at two historic series making a splash for the week of December 14-20, shareware darling Commander Keen and long time favorite Final Fantasy. 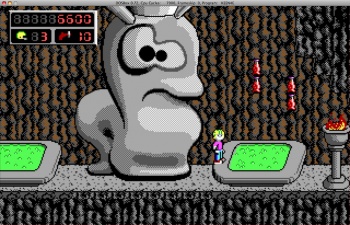 Eighteen years ago this week on December 14, 1990, an eight-year-old armed with a ship made of old soup cans, rubber cement and plastic tubing set off to explore the galaxy and of course, save the Earth in the side-scrolling cartoon platformer series Commander Keen. Developed by id Software and originally published by then-shareware giant Apogee Software, the games themselves are pretty simple and quite fun.

In Invasion of the Vorticons: Marooned on Mars (the first episode), an alien race named the Vorticon steal components of Keen's ship, and the game is centered on retrieving the missing pieces to return back home. The Vorticons are the main villain of the first trilogy, determined to destroy the Earth in chapters two and three. Marooned on Mars also featured the debut of what was known as the Standard Galactic Alphabet. Pen and post-its at hand, I probably wasn't the only hardcore fan who jotted down all the references while playing in hopes of cracking the code. It actually took a while back when I first discovered the game (this was well before Google, after all) - the alphabet was only featured in bits and pieces until Keen Must Die (episode 3). Occasionally challenging and strangely compelling, Commander Keen clearly tapped into a gaming audience of PC gamers who most likely were also fond of Nintendo's scrolling platformers. Best of all, the first episode was free. Gamers were immediately hooked and ready to offer up money for the rest of the trilogy - within a month, id Software saw its first royalty check of approximately $10,000 and the company was formally created in February 1991.

One year and one day later (December 15, 1991), Goodbye Galaxy was unleashed, giving Keen fans another two exciting episodes to pogo hop their way through, this time focusing on the galactic domination efforts of the Shikadi. In the interlude between the end of Invasion of the Vorticons and the beginnings of Goodbye Galaxy, a quirky stand-alone episode titled Keen Dreams was produced for Softdisk to fill contractual obligations.

Goodbye Galaxy continued the improved graphics found in Keen Dreams, featured an abundance of catchy music, and introduced memorable characters such as the villainous Dopefish in episode four, Secret of the Oracle. Also adding to Commander Keen's charm was the addition of mini-game Paddle War. Sure it was Pong, but I loved it all the same. While it may have been coded "by Keen" for those long trips in space during episodes 4-6, the no-frills game proved to be a great way to kick around thoughts while taking a break through occasionally tricky levels, or more accurately in my case, goof off when homework was supposed to be a better option. Goodbye Galaxy consists of two episodes, with episode six's stand-alone story (Aliens Ate My Baby Sitter) serving as the final official installment of the original franchise. As a trivia note, Aliens Ate My Baby Sitter was completed before episode five.

Commander Keen helped make shareware hot, serving as a role model for future efforts Wolfenstein 3D and Doom. The series also featured one of the first smooth side-scrolling game engines for the PC. Despite being a clear success, company direction shifted and the charming series was set aside and allowed to fade a bit into near obscurity. Clever Easter eggs referencing Commander Keen and/or the iconic Dopefish would occasionally sprout up in games through the years, however.

In 2001, Activision resurrected interest in the title and published a Commander Keen game exclusively for the Game Boy Color system. This should have been good news for fans, but it wasn't. Reaction was largely negative, with fans of the original series deriding the new entry for "completely different" gameplay and critics charitably pointing out the series was a "fun game for its time", but unfortunately showed "signs of aging". The 2001 effort was also found to be "rough around the edges". Official Dopefish site creator Joe Siegler went as far as bluntly stating "quite frankly, it's crap". Putting the 2001 entry aside, the series is still remembered fondly by gamers when discussing DOS titles.

Commander Keen wasn't the only game this week that made its appearance, but so many years later it is safe to say this little vintage classic will have a home in many software libraries despite the abundant technology advances since then. Fortunately there are many fine choices out there to make this happen, including DOSBox (Windows) and Boxer (Mac) so anyone reading this column and craving a retro gaming fix won't have too far to go.

Additionally this week, Final Fantasy X arrived in the North American markets just in time for the 2001 holiday season. FFX became the first PlayStation 2 game to first reach two, then four million copies sold. Featuring a bittersweet and beautifully rendered story, FFX cost Square approximately 4 billion yen ($32.3M USD) to develop and brought in net revenue of roughly $110M USD during its initial sales. Classified as the "definitive role-playing game" for the PlayStation 2 at the time, the game was praised for drawing players in with a "completely original, fascinating, even emotional tale". Continuing the trend of Final Fantasy mini-games, FFX introduced the new sport Blitzball (a cross between football, soccer, and waterpolo) to the series. This mini-game was definitely not part of any of my favorite ways to pass the time, unlike Paddle War several years before.

Since we can't avoid the holidays forever, it is time to put everyone back in the festive mood and wrap things up this week with a video-game themed special starring a classic and popular character from the 1980s: Pac-Man. Television watchers were subjected this week to one of the cheesiest video game tie-in holiday specials ever: Christmas in PacLand, first airing on December 16, 1982. Featuring the Pac "family", the characters teamed up to save Christmas after Santa crash lands in PacLand and the evil ghosts steal his presents. Wacky hijinks and happy endings ensued, of course.

Until next week in video gaming history, keep an eye out for Dopefish, protect your freshly wrapped presents from Pac-Man ghosts, and don't forget to eat your vegetables.

Researcher Nova Barlow notes the fastest way to catch her ear is to make an offhand Commander Keen reference in conversation.