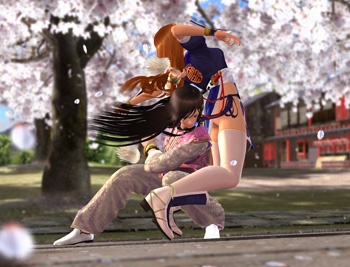 While the common perception is that nothing ever happens during the last week of the year in the videogame industry, this week we'll take a look at one between-holiday release and take note of several important industry figures specifically honored at New Year's.

Dead or Alive 4 hit the shelves mere days after the 2005 Christmas holiday, set to usher in 2006 in style. Designer Tomonobu Itagaki continued his prolific commentary through the earlier part of the year, noting in a May interview he was spending 99% of his time on Dead or Alive 4. "New characters and story -- there's a lot to do," he commented, "to the point that over the past four days, I've only gotten forty minutes of sleep." This was likely exaggerated of course, but left gamers with an amused sense of developer dedication to the title. The press seemed to think this effort made a fine game without blinking an eye at potential quality of life issues, and many standard reviewers showered the game with favorable praise upon release. The game itself went on to reach enough sales to earn "Platinum Hits" status.

A little over two years later, the picture was not so rosy. Itagaki left Team Ninja and Tecmo earlier this year in a storm of flurry, fury, fuss and litigation. After stating his intentions to leave the Ninja Gaiden franchise (and Dead or Alive) behind the month before, things got a little bit personal with Tecmo President Yoshimi Yasuda. Itagaki claimed Yasuda had reneged on a "completion bonus" for Dead or Alive 4, among other things. Yasuda went on to resign in late August this year for "personal reasons."

On December 31, 2001, it was announced that Jeremy "Jez" San would be awarded an OBE in the New Year Honors, becoming the first person awarded specifically for services to videogames. As a point of reference, the British honor system is designed to reward personal bravery, achievement or service to the United Kingdom. San started his long and industrious career as a teenage hobbyist, learning on TRS-80s and going on to develop his first full game, Skyline Attack for the Commodore 64 not long after. StarGlider (Commodore Amiga) is one of his most famous works for bringing 3D-like effects to a game at a time when true 3D effects were significantly hampered by underdeveloped hardware. This work gained the attention of Nintendo and he went on to help develop the Super FX Chip for the SNES. The chip was then used in StarFox, StuntRace FX, Yoshi's Island, and a few other games, released and not. Argonaut went on to develop more videogame technology that never saw the light of day for several companies, and the company eventually created its own product as a direct result, the Argonaut Risc Core. Argonaut eventually closed, taking over two subsidiaries in the process, Morpheme and Just Add Monsters. While Morpheme was sold to Eidos, Just Add Monsters rebranded itself as Ninja Theory following the release of Kung Fu Chaos and went on to develop Heavenly Sword for the PlayStation 3.

These days, San modestly downplays his involvement in the stunningly beautiful 2007 title. In an interview for The Armchair Empire he commented, "I provide a sounding board and non-executive advice to the company, but the Ninjas run themselves."

Other industry notables who have received New Years Honours since then include founder of SCi Jane Cavanagh (2007), long time game designer and author Ian Livingstone (2006), and ambitious developer Peter Molyneux (2005).

On New Year's Eve, Researcher Nova Barlow will raise a glass to toast another fine year in videogaming history. She also plans on sleeping a lot more than forty minutes.

Diversity, One Dragon-Punch at a Time Ray Huling 29 Comments
Comments on