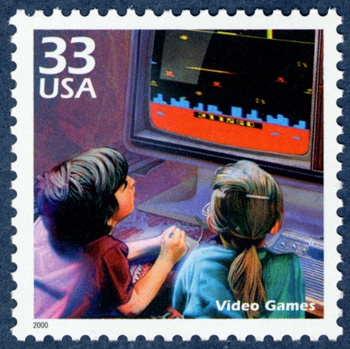 This week in videogame history, we're going to take a look at several things that have left an undeniable stamp on the industry and in our minds including the hard work of inventor Ralph H. Baer, various videogame patents (and the lawsuits that came with them), World of Warcraft, and an actual commemorative videogame stamp.

Nine years ago this week, the U.S. Postal Service decided to "celebrate the century" by issuing a series of stamps representing the best of the 1980s. The souvenir sheet featured popular 1980's era icons such as the musical Cats, The Cosby Show, Cabbage Patch dolls and hip hop along with videogames. Sharp eyes will note that the game depicted on the stamp actually exists for the Atari 2600. This was not the first time a game had stumped me, nor would it unfortunately be the last. However, it would be a game that had become so far etched into my mind that I could identify it on sight years later. Not many games can hold that claim.

Way back in 1968 on the 15th of January, the first application was filed for a "video gaming and training apparatus" by inventor Ralph H. Baer. While originally an application for a serial number, the effort was abandoned in favor of what would later be filed and approved as patent 3,728,480 ("Television Gaming and Training Apparatus"), or as Baer likes to refer to it, the "480." This early work led to the "Brown Box," which in turn led to the Magnavox Odyssey. Never one to rest on his laurels, Baer moved on from videogames to electronic toys and games, in addition to dabbling in general consumer products. He still keeps a hand in the industry with his latest reported product being "something to communicate with both the PlayStation 3 and the Xbox 360."

"480" was the central figure in a lawsuit against Atari and Chicago Dynamics as the protective team of Magnavox and Sanders became eager to take on any possible threat to their intellectual property over the years, starting in the summer of 1976. On January 10, 1977, Judge John Grady ruled in favor of Magnavox and Sanders Associates on all counts in this lawsuit, although Nolan Bushnell and Atari had settled with Magnavox separately months before. Over the years, this decision would be reinforced time and time again, with "480" being held up as the pioneering patent of the industry for at least the next twenty years in and out of courts.

Just one year ago this week, news outlets caught up yet another lawsuit regarding videogame patents. Over the 2007 holidays the Copper Innovations Group unleashed a lawsuit against giants Nintendo and Sony, claiming each company's control devices were in violation of a patent filed in January 1996 for a "Hand Held Computer Input Apparatus and Method." Copper's patent described a "a method and system for generating command signals for a computer monitor or other equipment" with the resulting technology comprised of "a hand held device having a control disc readily manipulable by a digit of a hand holding the device." Specifically, Nintendo's Wii Remote, Nunchuck, Sony's Sixaxis controller and Blu-Ray remote were targeted in this action.

Knowing that a portion of our audience (and staff) is tirelessly devoted to World of Warcraft, it would be quite neglectful to not mention this week also heralds the two-year anniversary of the opening of the Dark Portal and the arrival of The Burning Crusade. Noted as the best selling PC game of 2007 (NA/EU market), it sold nearly 2.4 million copies in the first 24 hours. This was quite impressive, however the next expansion (Wrath of the Lich King) sold even more copies on its first day by moving 2.8 million units on day one. All eyes first turned towards Outland, a shattered floating remnant of the world Draenor and home to big bad guy Illidan Stormrage. Next they turned those same eyes towards Blizzard's announcement a week later when it was announced the impressive milestone of 10 million subscribers had been reached. Not just one, but two indelible stamps had been placed upon the market by this game - the overall success of the game itself, and the tremendous reception of its first expansion.