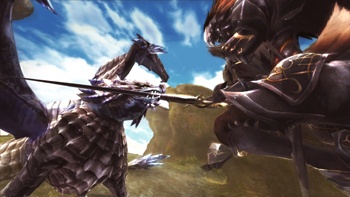 When Japan jumped to the forefront of the mobile phone revolution and flaunted a near 100% cell phone penetration rate back in the late 90s, it seemed like Japan would keep its technological lead for at least another two or three decades.

But in hindsight, the side-effect of jumping straight to the mobile world (and skipping the wired internet altogether) turned out to be quite dire, especially in the face of a world now connected entirely through the TCP/IP protocol.

Over the past nine years, I've seen Japan struggle with the concept of "online networking," and by that I'm not referring to social networking online. I'm speaking of computer-to-computer networking, or more explicitly, online gaming.

Before the PS2 launched, Final Fantasy XI was one of Sony's centerpieces for its marketing, and "online" was a frequently used word for its marketing campaign. But it wasn't until two years into the PS2's lifespan that FF11 was even released into the market, and online gaming is still more of an exception to the rule rather than the norm for PS2 titles. SOCOM and some EA Sports titles were the other notable online titles, but they were all developed by Western studios, and not by the Japanese.

It basically comes down to this: Japanese developers have lived in a world where owning a PC with an internet connection is (or was until recently) considered a luxury. Even today, Japan's most active online "forum", 2ch.net, is text based, when the rest of the world is already in the midst of upgrading to Web 2.0 with a plethora of multimedia-driven networking hubs like Facebook. So it is not surprising that Japan's recent attempts at online gaming have been laughable at best.

Armored Core 4 had a horrible "search game" system that required friends to click the "find game" button at the same time in order to have a chance at playing in the same game. Super Smash Bros. Brawl, suffered from incredible lag, while forcing each player to own his or her own Wii in order to participate. More recently, White Knight Chronicles, which has an online 4-player co-op feature, completely fails at that department with barren lobbies, the complete lack of voice support (text chat FTL), and an interface that reminds you of a dial-up BBS from 1992.

We now live in a world where World of Warcraft has 14 million subscribers, and gamers communicate through VoIP headsets instead of keyboards. When we think "online", we imagine both co-op and competitive, complete with a ranking system and matchmaking.

Yet, for Japan, going online means being able to browse Yahoo on your phone and online gaming simply means connecting to the internet and playing against random people, by yourself. Because to the Japanese, gamers who play online are losers who have no friends.

So, at least we know why the Japanese are so behind. They don't live the internet like we do, and they don't know what needs we face each day of our gaming lives. And they can't design products for people whose needs they simply do not share, let alone understand.