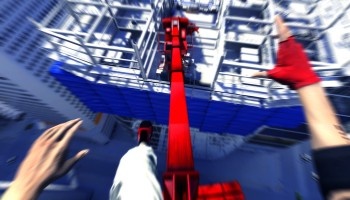 A big trend in game design these days is user experience design - creating an enveloping experience for the player to immerse themselves in. The side effect is that you probably have to have a linear playthrough - think Call of Duty 4, Condemned 2, F.E.A.R. 2, and the newly simplified Prince of Persia.

What all this means is that the big blockbuster titles are veering away from being transparent and moving into 'experience territory'. After all, one of the big advantages of the digital medium in games is that developers can substitute art, sound and tactile controls for what your imagination would have provided if you were playing a tabletop game or a sport. Simply put, the first medium for games was real life (Tag, Tic Tac Toe) then it was some paper and plastic (Monopoly, D&D). Now game developers are even providing 'the experience' part of gaming.

And while it's all quite cutting edge and interesting, it's a very fragile thing. One peek behind the curtain and the experience is exposed. Discovering the machinery running a game is like waking up in The Matrix. Take Mirror's Edge for instance - if you don't scrutinize too much and follow the rules you can have a fun time running away from police and scurrying up the sides of buildings. However, things start to fall apart when the user wants to break the rules. Try to punch a cop and he'll shove you back every time - it takes over half an hour to kill four enemies you're not supposed to kill in Mirror's Edge. A game with a focus on user experience has to break when someone rubs it the wrong way, and DICE's solution was to try and kill you.

Even Call of Duty 4 follows suit; in fact the whole franchise does. Whether it's an unending enemy spawner that assaults you forever until you discover the magical boundary you must cross to turn it off, or a pair of soldiers framing a specific door you must go through, even the masters of linear gameplay fall victim to the inherent awkwardness of their design philosophy. I recall some of the reviewers at 1Up were told by Infinity Ward that the game was meant to be played on Hard. What the reviewers found was that it was marginally less fun when they died so often; it broke the seamless playthrough - and dying often means seeing all the dirty tricks first hand. This ambush always comes from the left, you can't shoot the guy in that window, etc. It presents the pretense of choice where there is none, as far as progression is concerned, and when the player is exposed to the machinations of the designer they can quickly grow tired of jumping through the hoops.

A relatable example can be found in old cartoons: it's easy to see which vase will tip over onto the character's head because it's brighter than the other objects around it, and it's very clear that it's been drawn on another layer and laid overtop the background. The viewer knows exactly what is about to transpire. There is no chance any other objects will fall on the character's head; it's clear as day the vase is going to animate. In the same way when players discover that the game has narrowed their choices down for them instead of giving them real options, the course of action becomes plain as day. In a medium that aspires to simulation it would seem that pretending to simulate choice is a dangerous business. The viewer of a cartoon might not care if they can predict an action onscreen, but the player of a game has his play spoiled when he discovers his actions are ultimately being controlled. Most gamers get into a fit of rage when the plot of an upcoming game is spoiled for them; it shouldn't be a stretch to assume that the same applies to gameplay.