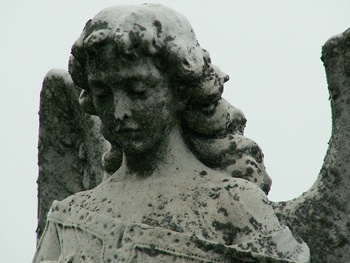 The first time I experienced death was in King's Quest 3. My character would gaily tumble to his doom if I missed a pixelated step, and I learned then that death was more of an annoyance than anything permanent, because I'd have the load screen up even before he'd technically died.

The second time I experienced death was in Quest for Glory 1, when I found, with everlasting glee, that if you type "pick nose" as a thief, your character pushes his own lockpick up his nose, into his brain, and dies. I learned then that death is hilarious, and will amuse friends and passers-by alike (except, generally, my mum).

This time, I'm not sure what I've learned.

On the 11th of April, 2008, my aunt died. The culprit: breast cancer. It wasn't a surprise, no misstep in an 8-color world, no totally overpowered goblin slaughtering me at level 1. I died, and yet, I didn't. My power over death vanished as I contemplated a life without checkpoints or autosaves. I can't go back, and it feels wrong.

There are those moments, in games, where you get hopelessly stuck, trying to get through the same puzzle, the same patch of corridor, over and over, what seems like a hundred times (or, at least, that's the number you tell your friends). You load, die, and load again so many times that it becomes habit, and all you can think of is beating the challenge before you, as the minutes stretch into hours and finally, exhausted, you give up.

But even if you manage to beat every challenge thrown at you, some games will always have a tragic ending. Revenant. Fatal Frame 2: Crimson Butterfly. Planescape: Torment. These are the games that have affected me, deeply, and all of them are tragedies. Even knowing the outcome, I still play them, talk about them, and even recommend them. The short reason for this is that they make me feel alive. The longer and more complicated meaning touches a part of me that I wasn't ready to admit to for a long time, but now compels me to write this article.

In all these games, though the tragedy is there, it's nothing like someone slowly dying of cancer. People are consumed by galaxy-spanning battles, or a curse, or some knowledge or outcome they have to pursue, literally to their last breath. These games say nothing of having lived and then just slowly losing that vitality, of having to wait an endless wait until the inevitable. There's no reward, no greater goal. The only outcome is death. Where's the story in that?

The story is in the life of an extraordinary woman who lived, in the truest sense of the word, up until the very moment she died. It's in the gifts she left, the shadow of her smile, the continuing grace of her whispers, and the memories inside a heart long past breaking. It's in the joy, and wonder, and awe she brought to those who knew her, and it's in the eyes of her small niece, looking up at her before being swept into a hug, and knowing that anything is possible.

Maybe that's why I'm so confused. In all my many years of losing loved ones on the screen, nothing has prepared me for this particular variation. I'm so used to video games emulating life, that I'm not sure where to start when they don't. About twelve months ago, in a movie, book, game, or any recent media, she would have breathed her last breath, the credits would have rolled, and people would go on with their lives, saddened, but enriched. I find that a little ironic right now.

Women at the Pinnacle justinmcelroy 0 Comments