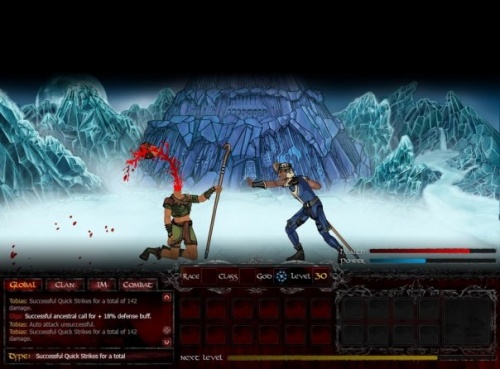 Before I begin, let me make one thing clear: my PvP experience is pretty much limited to World of Warcraft. I've encountered it in other MMO's, but all blame lies in WoW for making me assume the fetal position anytime PvP is mentioned. What horrific episode caused this irrational fear of PvP (aka Pwndophobia)? During my first WoW adventures, as a wee Undead mage exploring the countryside, innocently picking flowers, I was mercilessly stalked by a high level Paladin who proceeded to one-hit kill me and then laugh over my rotting corpse. Over and over and over again. That's right, I was corpse-camped, and I haven't been the same since.

So, you could imagine my trepidation when I heard about the new PvP browser game, Disciple. When it was first brought to my attention, I was more than just doubtful, I was downright agitated that anyone would think a PvP game could be a proper recommendation for a person like me. However, after browsing the website, I felt hopeful. Disciple focuses entirely on PvP, but unlike the hardcore, grind-heavy tag-teams of WoW, it's a casual PvP game, easily played in your browser during breaks at work.

As much as I'd like to say that Disciple healed all PvP wounds of yore, I just can't. Perhaps it would have - if I had actually been able to PvP. Overall, it turned out to be just another frustrating experience - only this time, the blame rested entirely with the game itself and its lack of online players, and not from being face-pwned by a level 5 Druid twink.

I began my slow descent into the fifth level of PvP hell by creating a character. I chose an Ashasian bloodletter - a high damage, melee combatant. There are few customization options available, and for the most part they're completely arbitrary: hair, chosen deity, and skin color.

I went for bald. Who has time for hairstyles when you're busy kicking ass? They didn't have a choice for "agnostic, but open to suggestions," so I chose Ouramazd as my main deity, mostly because it just sounds badass. As for skin color: albino. I didn't know why these races are embroiled in an genocidal war, but perhaps I could be the one to teach them that skin color, at least, doesn't matter and we should all just lay down our weapons and hug it out. By the end of character creation, I was itching to PvP, my pent-up frustrations and the need to redeem my slandered PvP name urging me to click 'Play.'

After familiarizing myself with the UI, I quickly located the battlefield and waited expectantly. Yet, the generic search for opponents kept coming up empty. Perhaps my reputation had preceded me; perhaps any would-be combatants had taken one look at my intimidating battle cry of 'rawr!' and fled, unfortunate victims of their own pwndophobia. Undaunted, I expanded the parameters to include those a few levels above me. It may take more effort, but perhaps I'd get lucky and knock them out. Still empty. OK, parameters be damned. Let's see who's online at all. Three. Three people are online. Upon closer inspection, I realized that the three 'online' players are NPCs, and not players at all. Absolutely no one was online. Well, strike that. There were some players online but they were level 20, and a puny greenhorn like me didn't have a Freeze-pop's chance in Hell at defeating the likes of them.