The gaming budget is usually one of the first casualties of a financial crunch. It's tough to justify $60 for entertainment when times get tight, but ironically, that's just when we most need gaming to take our minds off our real-world worries. Here at The Escapist, we'd like to offer a compromise: 10 titles that deliver top-shelf gaming at bargain-bin prices.

You'll likely notice the lack of console games on this list. There are certainly many excellent low-cost console games to be had, but when it comes to gaming on the cheap, there's just no beating the PC. Most of the games on this list can be purchased for less than a latte, and several are completely free. This list doesn't just save you money, though; it also introduces you to games you may not have heard of or simply missed their first time around. Take a look, and post your favorite gaming bargains in the comments!

Loom is an old-school adventure game from the heyday of the genre. Guide lead character Bobbin as he tries to discover what has happened to the other Weavers on Loom Island. Loom will have you scratching your head and thinking laterally as you use the musical magic of the Weavers to overcome the obstacles that Bobbin faces on his quest. Loom is available on Steam for $5. 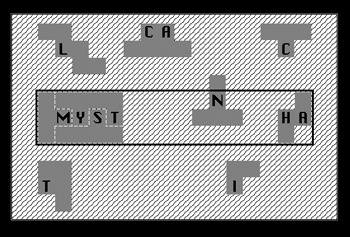 Fool's Errand (pictured) is a wonderfully tricky assortment of word and puzzle games based loosely on the Tarot deck. The first few challenges are pretty simple, but they soon turn quite devious. You'll have to install an emulator (included on the site) to run it, but it's well worth the effort. If you're a fan of Professor Layton, you'll likely enjoy joining the Fool on his errand.

No introduction to text adventures (also known as "interactive fiction") would be complete without a trip to Zork's Underground Empire. Fiendishly clever and with a sly sense of humor, these games are shining examples of their genre. They're primitive by modern standards - not a hint of sound or graphics to be had - but their gameplay is just as brilliant now as it was way back when. Also, those of you who don't know what a grue is will finally find out.

Ghost Master is pretty much the opposite of Ghostbusters: Using an assortment of ghosts, specters and poltergeists, your goal is to set enough scary traps to frighten the annoying humans out of the house. You only have so many spooky resources at your disposal, though, so scaring the bejeezus out of each and every one of your intended victims will take some careful planning. Is it worth a couple of bucks to frighten obnoxious frat boys? Yes. Yes, it is.

Do you like shmups? What about vector graphics? Have you ingested any hallucinogenic substances in the last 24 hours? If you answered "yes" to any of these questions, consider picking up Cactus Arcade, a collection of mini-games of varying degrees of polish from Swedish indie-savant Cactus. Highlights include Seizuredome, which is "kind of like Sumo wrestling except you have a gun," and Mondo Agency, perhaps the first and only videogame inspired by the films of David Lynch. They're not all winners, but when all they cost is a few minutes of your time, what have you really got to lose?