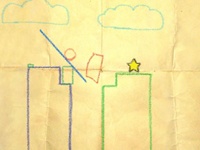 Released mere weeks after last year's holiday season ended, it's too easy to forget Crayon Physics Deluxe, the first commercial release from indie game designer Petri Purho and one of the most unique games of the last few years. And while hardcore gamers balked at the game's 70 or so relatively straightforward challenges, the less goal-oriented among us saw it for what it was: a game that allows for (if not rewards) pretty much limitless creativity. Witness some of the ingenious Rube Goldberg solutions to some of Crayon Physics' more mundane puzzles, and you realize that getting the ball to the star is only the nominal objective of each level. More important are the goals that players bring to the game, like creating the most complex solutions, or the most artistic. And because it only takes a mouse to play it, the whole family can join in the fun. Just keep the dick drawings to a minimum when Grandma's around. 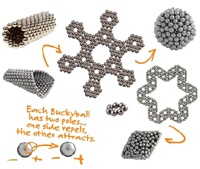 I don't care what you science-y people say: As sure as the box that I'm typing this on is the work of a 21st-century techno-sorcerer, magnets are magic. And Buckyballs might be the most magical magnets of them all. Each box contains 216 powerfully charged spheres of "rare earth" metal, which I assume means they're sprinkled with an especially scarce variety of pixie dust. Because of this dust, you're able to assemble Buckyballs into hundreds, if not thousands, of interesting shapes. A coworker has a set of these at his apartment, and every time there's a lull in whatever piece of electronic entertainment we're currently consuming, they're the first thing I reach for. Explain that, 16th-century English physicist and "father of magnetism" William Gilbert!

Mountain Dew and Bawls may have been the caffeinated beverages of choice during your teenage years, but let's face it: As an adult, you need something a little more sophisticated. Enter the Aeropress, from erstwhile flying disc (?!) maker Aerobie. The AeroPress is one of the gems of the coffee-making world, especially for single folks who don't really need a full pot of drip coffee in the morning. It allows you to make a cup of near-espresso in less time than it takes to place your order at Starbucks. And you can even indulge your inner chemist by changing pretty much every variable in the coffee-making process, from the water temperature to the steeping time, to craft your perfect cup. Many coffee fanatics have claimed that the $26 AeroPress can produce a better brew than home espresso machines costing hundreds more. On the downside, it vaguely resembles a penis pump, so don't be surprised if it raises a few eyebrows.

High Definition: The TV Specials of Christmas Past MovieBob 3 Comments