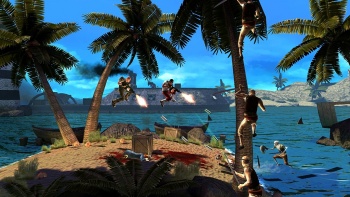 For our video interview with the developers of Matt Hazard: Blood, Bath and Beyond, click on The Escapist Presents here.

Releasing a 2D side-scrolling shooter, even at downloadable prices, is a bold maneuver for Vicious Cycle games. Slated for Q1 2010, Matt Hazard: Blood, Bath and Beyond builds on the huge amount of backstory created for the star of their previous game, Eat Lead: The Return of Matt Hazard. Viscious invited The Escapist to come and take a look at two complete levels and let us try our hand at one of them.

In Eat Lead, Matt Hazard is an aging videogame character trying to make his next-gen comeback. In Blood Bath and Beyond, or BBB, Matt's 8-bit self is kidnapped by the bad guys and he must now play through all of his old titles to save himself. The new game grew from a chicken-egg scenario. Dave Ellis and the marketing team for Eat Lead created many old titles, complete with box art, in which Matt Hazard was featured, such as The Adventures of Matt in Hazard Land and You Only Live 1,317 Times. We asked Jimi Doss, the Lead designer of BBB, which came first, the marketing for Eat Lead or Matt's newest side-scrolling adventure?

"Right before Eat Lead was coming out ... a lot of people on the forums and other places [were] excited about Matt Hazard's past and talking about old games," Doss said. "There were people who were either saying, 'Yeah, I remember playing those games' playing around with [the concept of a fake character] or people who really were confused and actually thought Matt was a real character. We loved the thought of that, and we were like 'What if we did make his old games available? '" The design team chose to make a side-scroller because as Doss puts it, "if any genre stands out of the 80s and 90s, it's side-scrollers."

BBB continues the theme of lampooning videogames and other cultural trends. Ellis sheds lead design mantle but stays on as writer and tries to nail the jokes. We didn't play in story mode, and skipped over the dialogue text, so I can't testify as to how funny the game really is. There are some chuckles, however. For example, you can play in one of three difficulties: Wussy, Medium, or Fuck This Shit.

None of that really matters, however, because the gameplay is fairly simple to grasp upon firing up the game. Matt has a gun and must shoot bad dudes and jump over obstacles in order to get to the boss at the end of each level. You can play alone or your buddy can join in as Dexter Dare, Matt's sniveling sidekick. It is Contra, writ in next gen graphics. Nothing is too surprising, although the boss fights were complex and epic enough to be quite enjoyable. In the pirate level, the player fights an enormous animatronic lighthouse. Yes, you can kill a lighthouse.

The level design is where the game shines. The team of artists under art director Alden Filion did a fantastic job making the 2D feel more like you are gazing into a diorama than observing a flat plane. The scenery and objects, such as the broken hull of pirate ship, point out towards the player and shift position when the camera scrolls to the right. The art team was integral into making some great visual jokes come to life, such as an enemy in the samurai level closely resembling a Pokemon trainer. "The designers said that they wanted a tank, something to stop you a bit," said Filion. "We were thinking, 'What could we do?' [Then it hit], who doesn't want to destroy a little Pokemon trainer and make him bleed?"

The tech for BBB feels seamless, as it should because the game uses the in-house Vicious Engine. It's actually the same tech they used for Eat Lead, but the action flows incredibly smooth. There were no jitters or jumps in the level we got to play, only unadulterated gun action.

All in all, Blood Bath and Beyond is a decent walk down memory lane, remembering the style of games we used to play on our old 8-bit Nintendo consoles. There was a reason the code was created, however. Many gamers, myself included, were just not that good at Contra, and subsequently never really enjoyed playing them. The same may be said for Matt Hazard: Blood Bath and Beyond.

The Future is Vicious Russ Pitts 1 Comment
Comments on