Since its release in 2008, Dungeons & Dragons 4th Edition has come under a lot of fire from seasoned D&D players who dislike many of the changes the new edition has made to the three-decades-old rules set. Yet others have defended D&D 4e as a necessary re-invention to keep an old game up to pace with current times, and one of the designers has claimed D&D 4e is better for classic gaming than its immediate predecessor, D&D 3.5. The Escapist was excited to sit down with Andy Collins and Liz Schuh from Wizards of the Coast to talk about the real strategy behind Dungeons & Dragons 4th Edition. Andy Collins manages the design and development of 4th edition and was also on the team for 3.5, while Liz Schuh is WoTC's brand director and oversees all D&D products from novels to games and miniatures.

On The Escapist side of the table is Publisher and old-school D&D aficionado Alexander Macris, along with Games Editor Greg Tito.

Read on for Part One of our two-part exclusive interview and find out why 4th Edition came out when it did, as well as the real reason tieflings are a core race. Part Two can be found here.

Alexander Macris: Why did 4th Edition come out when it did?

Liz Schuh: As you know, there were eight years between 3rd and 4th Edition launches and, you know, the world is speeding up, I think, in every aspect of it, so if anything I think we're not keeping pace with the speeding up of the world but we just felt that it was time for a new edition, so we went forward. 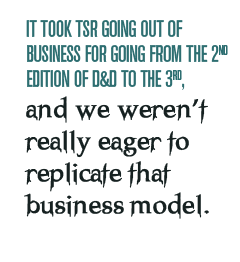 Andy Collins: Frankly, I think the intervals between editions is more coincidence than anything; it's not like there's been one unified body behind the timing of Dungeons and Dragons since 1974. It's gone through a lot of different hands, a lot of different people managing that, so there seems to be a pattern there, but I think that's more perception than reality.

And as far as the transition from 3rd to 4th, the thing I like to say is it took the company going out of business for going from 2nd to 3rd, and we weren't really eager to replicate that business model. So rather than wait until it was too late, we decided to be a little more proactive there.

AC: One thing we certainly saw over the course of 2nd edition was the audience did tend to age along with the game. The game was a very playable, a very entertaining system, but it didn't necessarily speak to the people who were coming up into the optimal RPG age category through new ways. When we were all playing 1st and 2nd Edition, we didn't cut our teeth on MMOs or console gaming or Facebook or any of those things. At best, maybe we had experience playing Monopoly or games like that, Risk, so that D&D was a totally foreign thing. That's just not true anymore.

People today, the young kids today, are coming into exposure from D&D after having playing games that have very similar themes, often have very similar mechanics ... they understand the concepts of the game. So in some ways they are much more advanced as potential game players. But in other ways, they are also coming from a background that is short attention span, perhaps, less likely interested in reading the rules of the game before playing.

And I'm not just talking about younger players now, but anybody. I know when I jump into a new console game, for instance, the last thing I want to do is read the book. I want to start playing. And that's a relatively new development in game playing and game learning. And we've been working to adapt to that, the changing expectations of the new gamer.