AM: It seems like a lot of the design decisions in 4th where you moved away from 3rd Edition or Classic seem more similar to World of Warcraft or similar computer games. Was that a very purposeful, strategic choice because of, as you said, people coming in with certain assumptions from entertainment they've already consumed?

AC: Some of it was that and some of it was simply a measure of - as professional game designers, we look at all games for lessons. Certainly, the lessons we learn from online games are going to be the most obvious ones because they have a lot of people familiar with the sources, but there's also lessons about turn management from European board games, interface ideas from card games.

AM: That's awesome. Can you give an example of something you learned from, for example, a European board game? 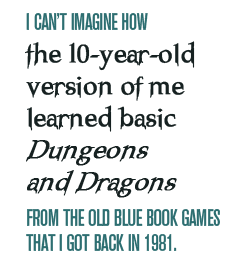 AC: One of the things that I like a lot about Euro board games is their presentation of rules and turn formats. They try to be very upfront about, y'know, "Here are the win conditions for the game. Here is what you do in your turn. Here are some graphics that show how you interact with the game board," that sort of thing. That's a little esoteric, I realize. Some of these are a little hard to put in words. They're the kind of things that you understand it when you see it.

Greg Tito: So, games like Settlers of Catan, where there's a defined, "Here's what you can do on your turn," were inspirations?

AC: Right, understanding how much attention should you be paying to the game when it's not your turn - that's a very interesting balance to make. There are some games that are ... when it's not your turn you can get up and walk out of the room and come back in 20 minutes. There are other games where you are all playing a Solitaire game at the same time. Some of the old-style rail games are like that.

Even Dominion, a game that I love a lot, has been called - and rightly so - by a number of people, like four people playing a Solitaire deck-building game simultaneously. And there are places where D&D has been like that. Where when it's not your turn, as long as the monsters not attacking you, you go play Xbox or what have you. We didn't want a game that was quite that far in that direction so we really worked to experiment with places where, "OK, you need to be more active, at least more away, when it's not your turn."

AM: Is that part of the whole "short attention span of the new gamer" as well?

AC: Y'know, it's not even just the new gamers. I've been playing D&D for, well, let's say a lot of years, and my attention span isn't what it used to be either. It's not about youth, it's just about the culture we live in and what we're used to. I can't imagine how the 10-year-old version of me learned basic Dungeons and Dragons from the old blue book games that I got back in 1981. If you handed me that game today, there is no way I would have the patience to learn it. And I'm a pretty smart guy, I do this for a living. But it's just a different time.