AM: What about from a more aesthetic point of view - a lot of esoteric races now made core to the game. Like the eladrin, their ability to teleport. What was the thinking there? Was that to attempt to introduce the anime feel? Was it catering to this manga taste that has developed? Was it something else, just trying to not be Tolkien?

AC: We wanted the Players Handbook to represent a broad crosssection of races, not only from an in-game cultural standpoint but also from players psychographics. And this is a good lesson you can learn from a lot of online games, MMOs. You don't want all your races to look the same, you don't want them to all act the same. You want different kinds of players to be attracted to different kinds of races. So there is a niche out there for the evil-curious, slightly bad-boy type of character.

The tiefling fit that really well for us, better than any of the other races that we felt really comfortable bringing into the core. So we felt like, "This is a race that has a lot of attraction, it's been around in D&D a really long time, maybe it's time to give this one a promotion, bring it up to the big leagues, so to speak, so it can play with the elf and the dwarf. And give it a very clear, different choice." The players say, "Y'know, none of these old races I've seen for the past 20 or 30 years kind of fit into the character I want to play." That's why you see things like the dragonborn and the tiefling. 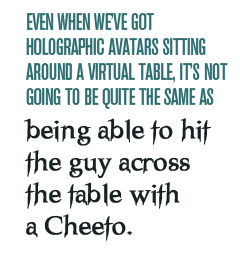 The eladrin is more recognition that the elf race historically in D&D has really been two races - it's been the sort of super-smart, arcane, Elrond style elf, but it's also been the primal, woodsy, archer-Legolas type elf. We wanted to make that distinction more apparent to the reader. And for eladrin we had a name and a concept for sort of the super-fey sitting out there and we felt that that was a good one to tweak a little bit and turn into a character race.

AM: So what's your vision for D&D in the new world? And how does the business model change?

LS: You know, I think one of the big things we've done to change how D&D operates in this new world is the addition of Dungeons and Dragons Insider. We've added digital tools that help both your at-the-table play but also your out-of-game prep. And I think we see more and more that people bring technology to the table. They've got either a laptop or a smartphone and they're integrating technology into their tabletop experience.

AC: Soon they're all gonna have iPads.

LS: For us, that's where our game does hit with a lot of these trends that we're seeing.

AC: Ultimately, the advantage that the tabletop roleplaying game experience continues to have over really any other gaming experience out there, particularly online and computerized, is that social camaraderie. There's always going to be a place for, "Let's get a bunch of the guys together and hang out for a few hours." And people's lives change, the culture of gathering changes.

We don't want to ignore the fact that there are other ways for people to get together and game, but fundamentally that getting together around a table is something that you - so far at least - can't replicate anywhere else. Even when we've got holographic avatars sitting around a virtual table, it's not going to be quite the same as being able to hit the guy across the table with a Cheeto.

GT: You guys mentioned D&D Insider, which I do think offers some really great tools for D&D. Wizards has talked for a long time about creating a virtual tabletop - where are you guys with that?

LS: Well I can tell you that it's still part of our plans, we haven't announced anything yet, but we will.

AC: We unfortunately learned the hard way that it is often best to wait until you are really, really ready to announce digital offers, so we're taking the conservative approach.

LS: But it's definitely still part of our plan.

That concludes Part One of the interview. Here is Part Two, where we talk about Tomb of Horrors and the return of the D&D Red Box.

Gallery of the Day: 8 of the Best D&D Modules of All Time ffronw 9 Comments
Comments on