GT: Many gamers are happy with D&D 3.5 and have stated that they're sticking with Paizo's continuation of that system. What do you think about Pathfinder?

AC: It's based on a tremendously well-designed game. [Laughs all around] Obviously, we know all those guys, we worked side-by-side with many of them in years past. It doesn't surprise me that there are companies out there that are looking to continue to support the third edition of the game. I remember somebody came up to me at one of the last couple Gen-Cons, sort of apologetic that they liked 3.5 better than 4th, and I had to remind them, "You know, I worked on both of those. It doesn't make me feel bad that you like one game I helped design better than another game I helped design."

I think they're both great games, and if they were more similar the hobby would be worse for it. I think it's better to have games that are more distinct from one another that gives people clear choices. "Well this is the style of game I want to play, or this other one is the style of game I want to play." Nothing wrong with that. I think the 4th edition has a much greater growth potential than previous iterations of the game, I think it's friendlier to the audience, I think it's a little more cognizant of what new generations of gamers are looking for in an experience. 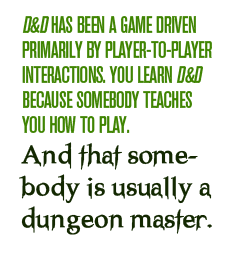 AC: I would say we focus on what we're doing.

GT: The 4th edition Dungeon Master's Guide explained how to dungeon master better than any other piece of literature I'd seen.

AC: If I had to point to one place where I think the new edition succeeded more than anywhere else, it made dungeon mastering more accessible, more fun, than ever before. And I say that being primarily a DM - that's my role in my group. That's a place where I have no compunctions anywhere saying we hit it out of the park.

AM: Do you have any statistics on what percentage of players will dungeon master and what are only players? I've often thought that the choke point in the growth of tabletop gaming is an insufficient number of people motivated, or skilled, or trained to rabble-rouse a group of six friends, or four friends, and run a game.

AC: Dungeon Masters are our lifeblood, no question about it. When you're talking about the tabletop game experience, we depend on them. As customers, they're our best evangelists. D&D has been, and I think always will be, a game driven primarily by player-to-player interactions. You learn D&D - for the most part - because somebody teaches you how to play. And that somebody is usually a Dungeon Master. So we're continuing to look for ways we can help them, and certainly 4th edition makes a big strike there. The DM Rewards program we rolled out last year, again, is an effort to identify and thank those people who are keeping our game vibrant.

For Part One of The Escapist's Exclusive Interview with Wizards of the Coast, click here.