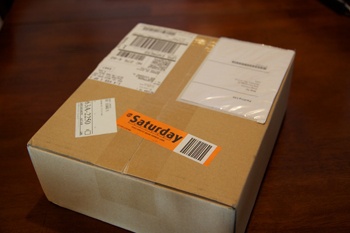 I set out Saturday morning intent on keeping busy. I knew that nothing would happen after it arrived and there were chores to be done. If i was going to spend my day caressing my new shiny toy, the least I could do was keep out of spousal hot water.

I went out of my way to drive by the local Apple shrine to see if there was a line outside akin to the previous two iPhone lines in which I was perfectly happy to wait in years past. This year I chose to forego the nerdery and allow the iPad to come to me. Perhaps I am older and wiser these days, or perhaps I simply couldn't chance not receiving the latest addition to my toy box on Day 1. There were indeed several dozen believers queued up at 9:00, though not so many that the line wrapped around the building as happened for similar Apple launches.

Errands complete, I raced home. What if UPS showed up early? What if the wife didn't hear the door on a sleepy Saturday morning? What if the house was surrounded by rabid hounds? Needless to say, I would not leave something so important up to chance.

As luck would have it, I was home fewer than 10 minutes before the doorbell chimed. Our brown-socked hero had arrived unscathed by the lupine hordes surely circling below, offering up that which I absolutely wanted, but likely didn't need: the iPad, this Mac dork's new best friend, sure to accompany me at every opportunity. Should such a constant companion deserve a name? Up until now I have only ever named my conventional computers, resisting any urge to name my iPhones. Would this iPad turn the tide? Perhaps time will tell... as would, more likely, getting it out of the box.

As any Apple initiate would expect in the last decade, the iPad's packaging is handsome in its simplicity and the object of desire itself lies easily within reach. Lifting the box cover revealed that nothing stood between the iPad and me but the clear protective wrapper, and even that had a single pull tab releasing the machine from its final binding.

And then it was mine. There is simply no way to put into words what it feels like to hold. It is completely rigid, much like the original iPhone, with just enough heft to feel like a quality piece of high technology. If you didn't know better you could assume that it was carved of a solid hunk of sorcery, as there are few apparent inlets of any kind, nor any easily conceivable manner in which to peek at its inner steamworks.