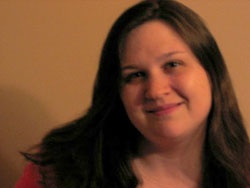 It's a big topic in today's gaming world. More and more women are playing videogames in 2010, but the mainstream perception is that they only play so-called casual games like FarmVille or Bejeweled. While statistics do slant that way, one female game designer believes that if a game is good, and it hits on a few specific gameplay levels, then that game can transcend the typical "girl game." Jennifer Canada began her gaming life in a similar fashion, starting with more casual games and then graduating to MMOGs and finally a career making AAA titles at Insomniac Games. I saw her panel at GDC in San Francisco about garnering the female gamer audience and after discovering that her office was literally across the street from mine in Durham, N.C., we planned to meet to discuss her design ideas in more detail.

Perhaps it is Canada's unique background that has informed her game design. She grew up in Indianapolis, Indiana, and didn't play a lot of games until much later in life. "I had a Gameboy but I barely played it," she said. "I didn't have any friends who played games. I actually didn't start playing games until college." That's where she lost a lot of time that she should have spent studying. At first it was a real time strategy game called Lords of Magic that drew her attention but she soon graduated to nefarious activities in The Sims.

"I basically spent most of my time cheating so that I could build houses," she said with a laugh. "After that, it was Dark Age of Camelot. After those three [games], I was hooked."

DAOC was a pretty hardcore PvP-based MMOG. How did she get involved with a game like that after the carebear activities of The Sims? "I think it was because it felt like you were really there. I just loved the sense of being in a location, and that was what, when I eventually played WoW what I really loved about it," Canada said.

For her undergraduate degree, she actually began as a classical voice major, before settling on political science at Rice University in Houston, TX. Then she heard about the Guildhall at SMU, in nearby Dallas, which began offering coursework in game design in 2003. "I heard about the Guildhall. I was lucky, that it was such a good program, because I didn't know anything about it," she said. Canada was actually in the second graduating class, before the school was even accredited as a Masters program.

"When I finished, it was just a certificate," she said. "Their plan was always to let people who graduated before it was available as a Masters to come back and finish their thesis." She received her certificate in 2005, but she began her thesis, which is necessary to receive a Masters degree, in 2007 when the Guildhall was able to start offering them. She had already known what her topic would be, Canada just had to put in the work into completing it. The idea of female gamers is very important to her, for obvious reasons.

GDC 2014: Getting More Women to Work in Games Is Easy Greg Tito 123 Comments
Comments on