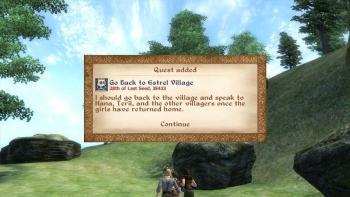 "When I was at the Guildhall, there were 2 girls out of a hundred guys," she said. "So I knew I could have that topic to myself. I think there's a lot of focus on how girls are different gamers than guys, I just really think that they are similar in a lot of ways. You can never generalize a whole gender, you can certainly find trends, but if you look at what's going on now with social games, all you hear is 'Women like this, and women like that.' But when you're talking about girls that play mainstream console titles versus girls that play Bejeweled and Facebook games, they're different types of gamers. It's a lot easier to generalize and say what the social gamer girl is going to like vs. the mainstream gamer girl."

The title of her thesis was "Gender-Related Gaming Considerations: A Practical Exploration" which you can peruse here if you are interested, all 545 pages of it. To prove that in-game variables can be used to appeal to females in mainstream games just as much as the casual titles, Canada created a short story using the editor in Oblivion. This was no small feat and it took her about 250 hours. "I had to learn Oblivion to do this, I had literally never touched it before," she said. Over the course of that time, Canada wrote and designed a story that utilized the specific strategies of how to write with the female audience in mind: detailed backstory, atypical female characters, in-game relationships, moral complexity, non-violent action, flexibility of choices, and a meaningful victory.

The level was called Mirei of Estrel. Mirei was the wise-woman in the village of Estrel, but long ago, she was unable to save the mayor's daughter from fever and she was banished from the town. She left behind a husband and daughter, but Mirei remained on the outskirts of the village. The story involves girls who are being kidnapped, and Mirei, now middle-aged, soon discovers that her estranged daughter is one of them.

After the level was done, Canada hosted it at several sites including the main Oblivion site, Evil Avatar, RPG Watch, and Ironlore. It's also available here on her website if you'd like to try it out for yourself. She made sure not to telegraph that the Mirei was being used in a thesis about female gamers, only that it offered original gameplay. Unfortunately, it was difficult for her to get females to download the level. "I'd find another website, another forum that will get me some more responses. Then I'd put it up there and get fifty more guys," she said. She even posted at womengamers.com and was basically ignored there.

Still, she was able to get a decent cross-section of gamers to play through the hour-long Mirei and answer the questions to a survey she created. She then tallied all of that data and presented the results on her thesis, at the Game Developers Conference and at the Triangle Game Conference this week. When I heard Canada present the data, though, I was a little concerned with her survey methodology. She explained that she learned a lot during the whole process.

Jim & Yahtzee's Rhymedown Spectacular: The Analogy of the Mosquito Jim And Yahtzee 71 Comments
Comments on