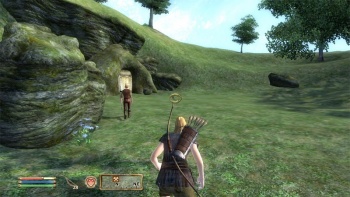 "There's no doubt that the results I was seeing can most strongly be applied to: if you played this level, this is what you liked. In terms of saying this is what you are going to like in every game, these results might indicate but they certainly don't prove it. My hope is that other people will repeat this line of research. I'd love to see someone do something in Half-Life or Unreal to draw in people with different backgrounds," Canada said.

But she did want to point out that men responded very well to the level, even the short description that she posted on gaming forums. "I did say that this mod has a lot of choices, I want to see what you pick, and it's about gameplay preferences. And on the forums, all of the guys were like, 'ooh choice, choice, choice, that sounds awesome, I want to play that,'" Canada said.

At the Triangle Game Conference, my colleague Allison Harn attended Canada's panel and she said that it was her favorite talk of the conference. The audience was mostly male, but Harn was especially swayed by the amount of guys who admitted to enjoying the facets of games that Canada presented, such as atypical characters and possible non-violent actions. The results from Canada's survey seemed to be representative of a lot of the gamers in the room at TGC, as well as the developers I overheard discussing the panel at GDC, such as Warren Spector.

To me, the kind of anecdotal evidence that she collected meant more than the statistics. Canada didn't have time in her presentation to highlight these quotes, but she was able to provide some of them for me. One guy said that the character of, "Mirei had a well developed sense of time and place. This made her, and the mod, more grounded in its storyline." Another male gamer said, "I liked your ability to make complex moral decisions. The adversaries weren't pointlessly evil and irrational, and so your decision to help them (at a cost to yourself) is meaningful." Finally, a male gamer wrote that "I liked how the mod offers different choices to the player, from the different possible answers in conversation to the various ways to tackle the central and secondary conflict. The emotional side is an added bonus."

These thoughts were echoed by females in Canada's survey, but perhaps because I am male myself, I took special interest in the fact that the very aspects of gaming that were geared towards women, actually were things that appealed to males as well. Perhaps the greatest evidence of all for Canada's thesis that AAA games can appeal to both genders by using these tenets, was that so many of today's best-selling and most renowned games use them. Games like Uncharted 2 and Dragon Age already offer a detailed backstory, atypical female characters, in-game relationships, moral complexity, non-violent action, flexibility of choices, and a meaningful victory.

That, more than anything, proves Jennifer Canada's thesis.

Greg Tito would like there to be more female gamers that aren't on GameCrush.com.

Escape to the Movies: Oblivion MovieBob 128 Comments
Comments on