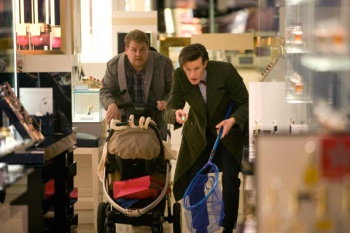 As he's being sealed into the suit, Craig hears Alfie crying and experiences a rush of emotion that overloads the conversion system. The cybersuit he's been crammed into magically splits open and drops away and the small clutch of Cybermen that had been lurking in his home town are defeated. The Doctor attributes it to Craig's primal drive to protect his offspring; Craig sums it up as "love" - which, let's be honest, amounts to pretty much the same thing. The idea that you could destroy Cybermen with love is not only insulting to their legacy, but to the viewers' intelligence. The writers apparently want us to believe that at no point during any of the previous encounters with the Cybermen, when humans were being scooped up and converted in droves, did anyone lament for their loved ones. No fathers feared for their sons, no wives longed for their husbands. Brothers didn't worry about sisters, grammas didn't give a toss about that nice boy down the lane who always shovels the walk when it gets snowy. Nobody ever felt sufficient emotion - be it love, fear, anger, or anything else - to create the feedback loop that saved Craig's life. Not once.

Yeah, I ain't buying it, either.

Emotions have been used to attack the Cybermen before; in "Age of Steel," the Cybermen quite literally went to pieces when their emotional inhibitors were turned off. Horrified at what they'd become, they freaked out, shut down and, in some cases, blew up. In this case, however, it was their own emotions that overwhelmed them, not those of someone who just happened to be nearby when he got upset.
The brave decision - the correct decision - would've been to let Craig die.

If there has been any bright spot in this otherwise uneven season, it has been the ongoing question of whether the Doctor is a savior or a menace. Looked at from one perspective, he's a superhero, a Space Gandalf coming in to save the day when no-one else can. But examined in a different light, he's a narcissist whose need to rescue people has become so overpowering that he actually puts them in the very situations from which they need to be rescued.

Killing Craig - while his baby cries in the distance, no less - would also underscore another theme that the show has toyed with this season: that the Doctor, alone in the universe, is a destroyer of families. Amy's baby, Melody, was taken from her specifically so that she could be turned into a weapon to destroy the Doctor. In "Closing Time," there was the opportunity to create the other side of that equation; rather than the baby becoming the weapon, the father would.

It would be a particularly grim ending for an otherwise doofy episode, but if we're really meant to be questioning the Doctor's true role in the universe - as its unwitting destroyer or its ultimate salvation - then let's go there. We, like the companions constantly put in harm's way, follow the Doctor unreservedly and trust him implicitly. We're confident he'll save the day because that's what he always does. This season wants us to question that trust, to really examine the man that we love so dearly and ask if things would be better if he just minded his own bloody business. If Craig ended up a Cyberman simply because he followed the Doctor's advice to "believe in himself," we might pause to think about how casually our beloved Time Lord messes with people's lives. And given that the Doctor travels so much in time, just picture what a meeting between the Doctor and a grown-up Alfie might've been like, should the boy ever learn the truth about his father's disappearance.

But Craig survived, and as a result the episode was yet another pointless placeholding throwaway. You won't remember it a month from now, assuming you haven't forgotten it already.

Sorry, Craig, you're a sweet bloke. But you should've died.