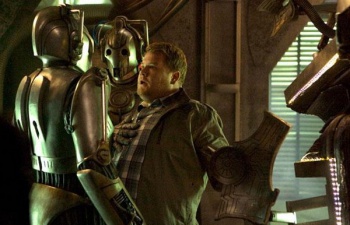 Warning: This article contains spoilers for the Doctor Who episode "Closing Time."

I've been threatening to start writing a Doctor Who column for some time now, because few things have impacted my life as much as that show has. It's not hyperbolic grandstanding when I say that I wouldn't be who I am today if it weren't for the Doctor, but I wasn't sure how I should begin writing about something that I find so meaningful. I feel a bit guilty that my first article about something I love so dearly should dwell on negativity, but man, Craig really, really should've died at the end of "Closing Time."

I don't have anything against Craig, who we first met in the amusing, but largely forgettable episode "The Lodger." He's a likeable shlub of a guy, an endearing everyman who's always seems just a bit startled to realize that he's successfully managed tricky tasks like walking and talking. When we revisit him in "Closing Time," we discover that Craig has done well for himself, having not only married the girl of his dreams, but had a son with her, as well. The episode's few charming moments come from Craig and the Doctor's interactions with infant Alfie, who prefers to be called Stormageddon and who manages to steal every scene he's in without ever saying a word. Shortly after the Doctor comes calling, Craig finds himself swept up in another dangerous adventure, this time involving classic Who villain the Cybermen.

Depending on which incarnation you're referencing, they Cybermen are either robots, made completely of inorganic parts, or they're cyborgs, with a wee bit of human left in them. Sometimes their brains are squishy, and sometimes they're bits from Radio Shack. They hail from Mondas, originally, but it's long since been blown up, so they've been roaming the universe ever since, hatching various schemes to take it over, or at least seize what power they could. They're technologically advanced, ruthless, determined and tenacious. If it wouldn't break the mythology for them to be familiar with Herman Melville, to the last, they'd grapple with thee. They're that kind of bad guy. In their current incarnation, they snatch humans off the street and "upgrade" them by removing their emotions and shoving them into Cyberarmor.

After the Doctor and Craig blunder around for a while, Alfie in tow, they discover that the Cybermen of "Closing Time" have been snatching people to use as spare parts. The Doctor gets nabbed, Craig comes chasing after him, promptly fails to defeat the Cybermen and gets shoved into the Upgrade-o-tron for cyberconversion. Seeing his sweet face being welded into a Cyberhelmet is gut-wrenching and horrifying - and short-lived.