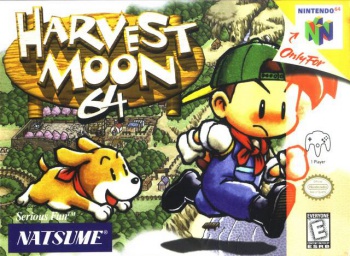 Fast forward ahead to later in the game after getting married. Usually when the main character hops into bed, he just sprawls under the covers and passes out. However, after the marriage, his wife stands by the bed and waits to go to bed with him unless he's taking forever. Hopping in bed changes from just sprawling as a single farmer to what appears to be cuddling with a wife/lover. Even as a young teenager I went "Whoa!" After a few nights of this she informed my character that they were going to have a baby, and I once again seemed shocked with a "Whoa!" My dad smirked and said, "Well yeah, what do you think was going to happen?"

Harvest Moon 64 clearly isn't about the sex, but sex is there if you're looking for it. Even when surrounded by the manga-influenced graphics and all-around wholesome attitude, babies have to come from somewhere, and it doesn't take much to connect those dots. But as a kid, this revelation that these two characters apparently had sex didn't result in me giggling about game characters doing it. Rather, I was touched by something sweet that I felt invested in.

An even greater example comes straight from Mass Effect. To explain this I'm going to have to get into some spoilers, so skip ahead if you don't want to know some minor plot points.

The first time I played through Mass Effect, I chose to essentially be myself, the Boy Scout soldier with no wiggle room. I sparked up a relationship with Liara, feeling it made the most sense as she was quiet and matched my character's need for something uncomplicated. Everything played out like a high school special, but by Mass Effect 2, Liara had left and I had to move on. Still being the Boy Scout, now more like the captain of the high school football team, it made the most sense for my Shepard to chase after Miranda, because she seemed essentially like the cheerleader of the group. After all was said and done, I sort of forgot about that whole experience. Why? Because I started over as a renegade female Shepard.

In this alternate timeline, my new Commander Shepard took no crap from anyone, killing anyone who was a liability and generally acting like a heartless bitch as much as possible. The only character she was nice to was Kaiden, and to some extent Ashley, as they shared a sort of badassery. The game seemed to go normally, with a bit more Jennifer Hale flair mixed in, until it came time to decide who died between Kaiden and Ashley. Ashley had died during male Shepard's timeline because I needed Kaiden's technical experience more than Ashley's skills. In female Shepard's timeline, Kaiden was the logical choice for a sacrifice.