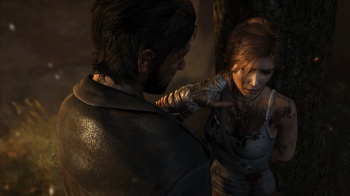 There's been a lot of negative reaction to the most recent trailer for the upcoming Tomb Raider reboot. People reacted strongly to the beating that Lara took in the trailer, most particularly a scene where she's pretty clearly threatened with rape. Their ire was fueled when Ron Rosenberg, the game's executive producer, made some pretty dumb comments about players not identifying with Lara, instead wanting to "protect her." Rosenberg came off sounding like a condescending chauvinist who doesn't understand the first thing about the player's relationship with Lara, but his ill-chosen words didn't diminish my enthusiasm for the game. I love this trailer. I find it inspirational. I wish to hell I'd had a heroine like this to look up to when I was a young girl.

I understand why people are troubled by the trailer - watching a young girl in pain is difficult. It should be difficult. You're not supposed to see a girl get impaled and think "Hell, yeah, that's cool!" - though there are certainly people out there doing just that. If you feel uncomfortable watching scenes of Lara in peril, that doesn't mean the trailer is foul, it means that you're a decent human being who doesn't like to watch suffering. But I'd ask you to take a step back from your unease for a moment and look at Lara's actions from a slightly different perspective, so that you can see what I see.

I see a young girl faced with dramatic adversity, an adversity so extreme she couldn't possibly imagine it, let alone expect to find herself faced with it. I see a girl who's alone, hurt, and terrified. I see a girl who's ill-equipped to face the challenges before her. But most importantly, I see a girl who keeps getting up. Not because she's some kind of warrior badass, armed to the teeth with martial arts skill, years of combat training, and a gun the size of a Buick, but because there's work to be done. If Lara is ever going to get home, if she's ever going to be safe again, she has to get up. And so she does. It's an incredibly simple, but important message that I fear is being lost in the many different arguments about the trailer.

The message that girls so often grow up with is that they're weak, both physically and emotionally. If there's a crisis, do the right thing and let the men handle it, sweetie. You're not up to the task. And while it's certainly true that men are typically physically stronger than women, that doesn't mean that it's right to teach girls helplessness. Do a quick comparison of the Boy and Girl versions of the How to Survive Anything books, and you'll see a pretty clear line being drawn. Boys are taught to survive a lightning strike, quicksand, and snakebite, while girls are taught to survive shyness, embarrassment, and truth or dare. The books aren't meant to be taken seriously, but the message comes through loud and clear, just the same: When it comes to the dangerous stuff, let the boys handle it.

This dynamic is constantly reinforced by the female characters we see in all forms of media. The hysterical woman screaming in the corner while the men solve the problem. The whimpering coward so paralyzed by fear that she's at best useless, at worst actually putting herself or others in peril. The woman who tries to help, but is so weak that her aggressor literally laughs off her assault. When we do see a physically capable female, she's frequently portrayed of being nearly devoid of emotion, as though a woman's condition was binary - either she feels things, or she can defend herself, but certainly not both.

In the Tomb Raider trailer, Lara isn't defending herself because she's not afraid, but in spite of her fear. Not only is that the definition of bravery, it's also a life skill that everyone would be wise to learn. Bad things happen in the real world. Not as bad as what happens to Lara, certainly - I doubt I'll be falling out of a plane any time soon - but you don't need to be lost in the jungle in order to be in very real danger. Which brings me to the most controversial part of the trailer - the threat of rape. Crystal Dynamics has recently come out and declared that there is no rape attempt in the trailer, and that "Sexual assault of any kind is categorically not a theme that we cover in this game." Technically, that's accurate - there is no actual attempted rape in the trailer, but the implied threat is still pretty clear.

I understand the concern that Tomb Raider will use Lara's escape from a rapist's clutches in an exploitative way, and I'm not excited about playing through some kind of quick time event to emulate the event. But to see Lara fighting back is inspirational, and more importantly, it's relatable. We probably won't end up on an island being harassed by tribesmen and bandits, but we will, at some point, face a situation that is unfamiliar and terrifying and be forced to realize that no-one is coming to rescue us. We'll get knocked down, and have to find the strength within ourselves to get back up - even if only in the metaphorical sense.

I get why people are upset, I really do. But I would rather not focus on what's knocking Lara down, and instead applaud the way she keeps getting back up.