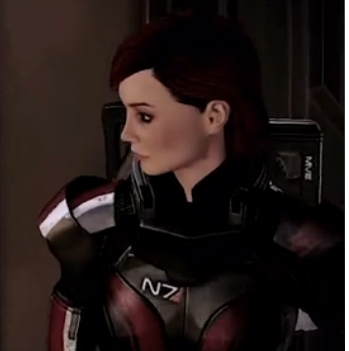 The following contains spoilers for Mass Effect 3 The Extended Cut.

The Extended Cut DLC solves some of the thornier problems of the original ending for Mass Effect 3, like spelling out that Joker only reluctantly left after being given a direct order, and providing the opportunity to tell the smarty-pants Catalyst to shove his solutions up his virtual ass. The original choices - to control, destroy, or meld with the Reapers - are all still there, and some fans will undoubtedly still find fault with what they see as certain thematic inconsistencies contained therein. Overall, however, the attempt to fill in the many, many blanks left by the original endings works quite well, explaining the full implications of the choices presented to Shepard and, more importantly, showing what happens to the crew of the Normandy.

Saving the universe is great and all, but it's too huge a concept to really feel particularly connected to. So much of Mass Effect is up close and personal that it's difficult to feel all that victorious once the stakes are raised to such monumental proportions. Your mission in Mass Effect 3 may be to gather enough assets to win the war against the Reapers, but what you end up doing, more often than not, is helping individuals find some kind of solace or happiness. Even when you are doing something on a grand scale like saving the Krogan from extinction, it's less about protecting a race as it is about doing right by your friends Grunt and Wrex. And that's why the original ending to Mass Effect 3 left me feeling so empty. I chose Synthesis, thus ensuring a peaceful future for all life everywhere. Great. Swell. Nothing personal, universe, but I don't really care about you, I just want to know that my damn friends are ok? Are they ok? Are they alive? I didn't know, and that was unacceptable. If Shepard had to die, so be it - I had played her as a noble soldier, and if she had to make the ultimate sacrifice in service of the greater good, she was ready to do it- but it meant nothing if I didn't know her loved ones had prospered as a result.

The Extended Cut finally let my Shepard's spirit rest by giving me a peek at how my extended family fared after the green light of Synthesis flooded out through space. Jack's a teacher. The Krogans have children and are rebuilding their world. The Geth and Quarians are working together towards a new future. Even the Reapers are doing their part, contributing the accumulated wisdom of all the species they've hoovered over the centuries. The fight was long, hard, and brutal, and too many good people got left behind, but ultimately it was all worth it. Shepard's friends are safe.

BioWare had promised that The Extended Cut would provide the closure we fans had been looking for, and I wasn't disappointed with how I, as Shepard, was given the chance to say goodbye to the comrades I had grown to love after such a long journey together. As Garrus, Liara, Joker, EDI, and Tali gathered around the monument wall on the Normandy, however, I was presented with an opportunity that I didn't expect: I, the player, was allowed to say goodbye to Shepard herself.

The monument wall is tucked away on the Normandy, and you pass it many, many times as you move from deck to deck, visiting with your crew mates, briefing with Admiral Hackett, and plotting your next course. It's a list of those who died during the war, and as you play through the Mass Effect series, the number of names grows. I was fortunate and saw only a handful of names make it onto the wall, but each one left a mark on my heart. Mordin Solus. Thane Krios. Legion. Admiral Anderson. And finally, Commander Shepard.

It's hard to talk about my relationship with Joanna Shepard without sounding like I should maybe step away from the console and spend more time outside. I know she's simply the digital avatar I use to interact with Mass Effect's game world, but she stopped being just that a long time ago. I've spent five years and hundreds of hours with her as she died, was reborn, faced crushing decisions and literally gave her last breath to save humanity. She is not just a really cool character to me, she is a fully realized person, with a clearly-defined value and belief system. In many ways, I am emotionally closer to her than I am to living, breathing people, and I didn't realize how much I needed to say goodbye to her until I was given the chance.

I cried as Liara placed Shepard's name upon the wall, quiet tears of loss. I'll miss her, but the void left by the original ending has been filled. I am sad, but content.

Goodbye, Commander Shepard. I will miss you.