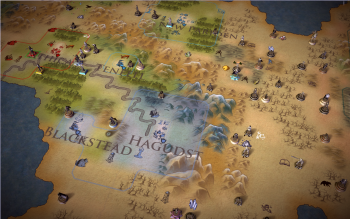 Elemental: Fallen Enchantress is what you might call a "big picture game." Its blend of strategic empire-building and heroic role-playing isn't the most focused gaming experience ever, but it does a nice job of turning the player into a true, and maybe even great, warrior-king, ruling from the saddle with blood on his blade.

Fallen Enchantress can be played as one of eight pre-made characters, each the leader of a unique Kingdom or Empire, or you can take advantage of the game's powerful customization options to create a ruler entirely your own, selecting profession, proficiencies, talents, appearance and even, if desired, a weakness that will put you at a disadvantage in some situations but provides an extra skill or ability in return. It's not an unimportant choice; despite the title, victory can be achieved primarily through conventional military means or even a smooth diplomatic approach, and who you are goes a long way toward determining how you'll play.

Fallen Enchantress provides a very thorough tutorial that goes a long way toward easing newbies into the action, as well as instructional pop-ups attached to each new event. It probably goes without saying but the manual is also worth a glance, or at the very least being kept handy for reference when things start to go sideways. This isn't the most impenetrable strategy title ever, but there's enough complexity on the table, not to mention a few odd quirks of design, to almost guarantee that sooner or later you're going to hit a point where what's going on isn't entirely clear. Your champion suffered a twisted ankle in her last battle and you can't figure out how to heal it? Check the manual to find out why! (I'll give you a freebie on this one: it can't be healed. Sprained ankles are forever.)

The game has more than a slight Civilization feel to it as you plan and eventually found your first city, but unlike that strategy classic, potential city locations are actually quite limited, ensuring a certain amount of sprawl to your kingdom. City management is fairly conventional, if somewhat simplified. Facilities ranging from simple gardens to the equivalent of Wonders of the World can be built, or units can be trained and dispatched to push out the borders of your kingdom, but it's an either/or proposition, which can lead to some pretty tough choices. As cities grow, they must be assigned one of three specializations dedicated to the pursuit of knowledge, commerce or martial prowess. The one rather unconventional twist to the process is the ability to cast "strategic spells" that can provide a significant boost to growth, production or other attributes. Doing so inflicts a slow but constant drain on your mana pool, forcing you to put a priority on finding, controlling and developing the elemental shards that power magic in the game if you want to take advantage of the potentially game-changing advantages they offer.

Those who prefer a more hands-on approach to leadership will find that the weight of the crown is relieved somewhat by Fallen Enchantress' unique approach to "Sovereigns." You are not an abstract lord looking down upon his people from on high in this game, but a unique, individual character, complete with stats, special traits, a personal inventory of weapons, armor and other items, and even the ability to buy and sell items from merchants in nearby cities. It's definitely "RPG lite," but the interaction is still full-featured and engaging enough to make it feel like it's "you" roaming the lands, cracking the toughest nuts and ruling from the frontier.