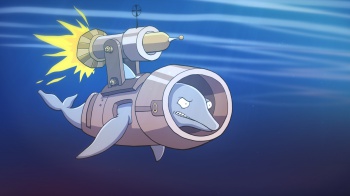 Chaos on Deponia is the second part of a planned trilogy, and it shows. It serves purely as a bridge from the strong opening chapter to a hopefully-worthy climax, and as the middle child it inevitably suffers. But it's a letdown in other ways too, with rougher edges than Deponia and humor that misses far more than it hits.

"Huzzah! All over again!" shouts the Chaos on Deponia theme song, and it couldn't be more on the money. In just about every meaningful way, this game is a repeat of charmingly rude Deponia, including an opening sequence that sees an insane plan hatched by lead character Rufus knock Goal, the heroine, from the sky, once again damaging her brain implant. But this time her personality ends up split into three distinct but incomplete components spread across three separate implant cartridges: Spunky Goal, Baby Goal and Lady Goal. It's like the Spice Girls had a transporter accident, and Rufus spends the balance of the game trying to recombine them into the one "real" Goal.

Aiding him in this task are Doc and Bozo, faces familiar to those who played the original, plus a mess of new supporting characters. Unfortunately, none of the newcomers are particularly interesting, and instead serve only as cheap (and largely unfunny) gags and throwaway plot devices. Janosch, for instance, is noteworthy only for his speech impediment, which serves as the basis for one of the game's most irritating puzzles, while the woman named Donna is either insane or brain-damaged and speaks only in odd tics and giggles - leading to another drawn-out, clunky conversational sequence. Rufus' enthusiastically pragmatic doppelganger Cletus, meanwhile, is almost entirely absent save for a brief appearance in the final few minutes, and as he's easily the game's most interesting antagonist, his presence is missed.

Things start off reasonably well, with a brief, gag-filled encounter between Rufus, Doc and Grandma Utz, but it doesn't take long before it becomes mired in another unfortunate bit of similarity with Deponia. The second chapter of the sequel is bloated, dull and lacks any sense of direction or purpose. There are puzzles and minigames that will make you want to punch a platypus, but it's not really difficult so much as just overloaded and underwhelming, and nowhere near strong or funny enough to support such a big investment in gameplay time. The action speeds up considerably once you're into the third act, but by that point the game is halfway through and there's just not enough gas left in the tank for a full recovery.

Part of the problem is Rufus himself, who somehow manages to be even more unlikeable and dimwitted than ever. It's difficult to nail down any specific change to the character but his egotism has a nastier edge to it as he ridicules Janosch, intentionally puts Goal in harm's way and behaves in other ways that move him from "amusing boor" to "legitimate asshole" and make his altruistic endgame transformation that much harder to buy.

Visually, Chaos on Deponia remains absolutely stunning, the music is excellent and the voice acting is generally strong throughout, but a number of minor technical glitches do make themselves known. Voiceovers occasionally don't match subtitles, such as when a character refers to "Brad Pitt" but the subtitle reads "Stefano Stileti," a grommet is incorrectly labeled as a "frommet" and one spoken line near the end of the game is still in the original German. Of greater concern than that lack of attention to detail are moments when characters will continue to repeat old lines of dialog over new ones during conversations - it happened to me twice - and an apparently rare (so I'm told) bug in the "Platypus Bataka" training segment that renders it entirely unplayable.

But Chaos on Deponia's biggest failing is simply that it doesn't add anything of value to the trilogy until the Big Twist is revealed at the very end. And it's actually a pretty good twist as these things go, but by leaving it to the closing moments and otherwise doing absolutely nothing to advance the story, it comes off feeling as though the game exists solely because Daedalic was determined to make this thing a trilogy and trilogies need a middle bit. It's not a bad game, and some of its flaws are an unavoidable part of being a second part, but it's still a disappointing step down from the original.

Bottom Line: It's never easy being the middle child, but Chaos on Deponia falls short entirely on its own merits. The characters aren't as good, the writing isn't as sharp, the attention to detail isn't quite up to snuff and it never manages to make itself feel necessary. It's not bad, but compared to its predecessor, and to other Daedalic adventures in general, it's not really all that good, either.

Recommendation: Wait for Deponia 3. If it's solid, grab Chaos on Deponia and enjoy the trilogy; otherwise, enjoy your memories of Deponia as a stand-alone game and leave it at that.