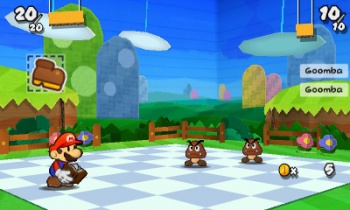 There's not exactly a shortage of Mario games these days, and Nintendo's 3DS has seen plenty of action from the plumber already. Because of this, it would be easy to overlook Paper Mario: Sticker Star, but don't. With its pseudo-RPG touches and unique art style, the franchise stands apart, and while Sticker Star does tread over some familiar ground, it's well worth the trip.

Sticker Star begins with a festival celebrating - what else - stickers! All of Mushroom Kingdom gathers in Decalburg for the return of the Sticker Comet, but as he is wont to do, Bowser shows up and crashes the party. The comet subsequently shatters into several pieces, sending the powerful Royal Stickers contained within flying to various areas of the kingdom. As you may have guessed, it falls on Mario to retrieve these rare items and restore order to the land.

As the plumber himself, you'll jump, run, and smash your way though the largely 3D world, dispatching classic enemies along the way. It's a platformer at heart, and the majority of the exploration has you walking either left or right on the screen, but you have a bit more freedom than in a traditional side-scroller. You can run up, down, left, and right on the modest swath of land the game affords you, but the path forward is always clear.

As with past Paper Mario titles, Sticker Star adds a few light role-playing mechanics to the mix. For example, combat is turn-based and you'll have to keep a constant eye on your HP meter to ensure you don't meet an untimely end.

However, there is no leveling system this time around, and your combat abilities are governed solely by what stickers you have obtained. These stickers are one-time use, and you'll need to collect them from the world or purchase them at a shop to ensure you don't run out. The system works well in that it encourages exploration, rather than simply pushing you forward to the next area. Valuable stickers can be anywhere and everywhere, and discovering a particularly well-hidden bonus offers a great sense of accomplishment.

The stickers you'll find along the way range from "worn out" basic attacks to ultra-powerful special moves that can take massive enemies down in just one hit. It's tempting to use the best of your arsenal right away, especially because many of the attack animations are just plain fun to watch, but it's always best to save the shiniest stickers for when you really need them.

Sticker Star makes excellent use of the 3DS's marquee feature, which is of course 3D functionality. You can choose to play the game in 2D mode, and to its credit it looks fantastic in just two dimensions, but cranking up that 3D slider really makes the world pop. Everything is paper-thin, and adding 3D offers a fantastic sense of depth. Not only that, but it makes navigating the world easier too, ensuring that you don't miss a platform or accidentally jump behind a block when you are attempting to smash it.

Later in the game, you are introduced to some more complex environmental puzzles that can be downright tricky to decipher. NPCs can offer some guidance, but their hints are often cryptic and too vague to be of much use. Nintendo could have done a bit more to ensure your objectives are clear, but when you finally do figure out a particularly frustrating mystery, you'll feel all the more accomplished. This doesn't excuse the occasional headache-inducing puzzle sequence, but it's a small blemish on an otherwise fantastic package.

As the adventure pushes forward you'll explore classic Mario environments including woods, castles, and deserts. Each environment offers its own unique exploration challenges, and you'll undoubtedly miss items or secrets at every turn, encouraging you to investigate larger areas multiple times. The change of scenery helps keep the journey feeling fresh, and you'll rarely grow tired of a particular environment or enemy type before the next one is introduced.

As mobile games go, Sticker Star should be commended for not taking on more than the platform can handle. It's perfect in size and scope, and the tale feels at once epic and easily digestible in small chunks. Hitting the sweet spot on a portable title is quite a balancing act, but the game does a remarkable job of offering a challenge without being overwhelming. Everything about the world - from the witty dialogue of the kingdom's inhabitants to the musical score that remixes some familiar Mario tunes - will charm you to no end.

Bottom Line: There's just no getting around it: Paper Mario: Sticker Star is yet another high-quality entry into Nintendo's cherished library of first party titles. The experience is high on satisfaction and low on frustration, making it an undeniably perfect fit for the company's mobile console. It's not entirely flawless, but as Mario games go, it's one of the best.

Recommendation: If you have even the slightest interest in saving Mushroom Kingdom yet again, Sticker Star was made for you. But even if the thought of fouling Bowser's plans for the umpteenth time gives you pause, you'll likely still come away from this adventure feeling like the old plumber still has a few tricks up his sleeve.