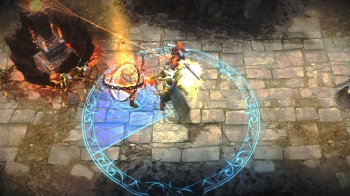 While the multiplayer online battle arena (MOBA) genre is growing rapidly on PC thanks to the success of games like League of Legends, the Xbox 360 and PS3 haven't been privy to the same treatment. The current console offerings like Awesomenauts are enjoyable, but lack the depth, lane-based strategy, and perspective of more traditional titles in the genre. Guardians of Middle Earth is the first true MOBA title for consoles and as such, it will inevitably be seen as a litmus test for whether this type of game can work without a mouse and keyboard. As it turns out, it can, and despite a bit of unbalanced gameplay, fans of the genre will almost certainly find exactly what they've been pining for.

For those unacquainted with games of this type, here's a basic breakdown: Teams of combatants - either player- or AI-controlled - wage war against an enemy team on a large map dotted with towers. While you and your fellow players take control of powerful warriors with a range of attacks, each side also has a large army of basic AI soldiers that act as cannon fodder. At the beginning of the battle, each team has an equal number of towers leading down either a single pathway or spread throughout three lanes, depending on the type of match you select. Players must both defend their own towers from destruction and also take down the enemy's structures. In the three-lane variant, there are arteries leading between the main lanes that hold bonuses, environmental enemies, and hiding spots. Once a lane has been rid of the enemy's pillars, players can then attack the opposition's base which, once demolished, ends the game.

In Guardians of Middle Earth, you control your hero - or "guardian" - from an angled top-down perspective, allowing you to get a glimpse of all the action unfolding around you. The characters are all drawn straight from the Lord of the Rings universe, including big names like Gandalf, Legolas, and Gollum. Each option has its own strengths and weaknesses, and victory is dependent on a well-rounded team. Some guardians, like Legolas, are designed to strike from afar, while others, like Gollum, prefer an up-close-and-personal approach.

Each Guardian has a role to play in battle, and if your team is too far weighted to one end of the spectrum, you'll have a hard time achieving victory. For example, a team with several large, slow-moving characters from the "defender" class can take plenty of damage, but can be easily corralled by the "tactician" class which can build dangerous structures and create bottlenecks in a lane.

Despite being a Lord of the Rings title, the game does a great job of avoiding any overly cheesy touches. The characters are rendered with care and look great on the battlefield. Occasional battle cries will remind you of just who you're fighting with - and against - and the original voices will make fans squeal with delight. Despite this, Guardians doesn't force the LOTR lore down your throat, and MOBA fans who don't favor the franchise will enjoy it just the same.