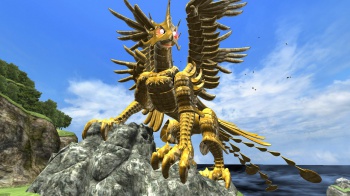 The premise of TANK! TANK! TANK! is solid - you ride around in an armored death machine and fight giant mechanical animals sent by moon aliens. The execution of that premise, however, is disappointing. The single player campaign fails to entertain for long, and is marred by vague advancement mechanics and repetitive, meaningless levels. The addition of another player in co-op feels like an afterthought. The party-oriented multiplayer offers some slight redemption, but after a few rounds of each mode everyone will want to move on to an offering with more variety and depth. Ultimately, the game is foiled by a lack of content and variety, and a few hours of play are sufficient to experience everything the game has to offer - which is not much.

The game's simplistic controls - a button for movement and a button to shoot - aren't particularly engaging. The tanks handle like a bar of soap, not a meaty, roaring vehicle, and the way your turret's aim is locked forward isn't like a tank at all. The controls don't appreciably change as you switch tank types, either, a wheeled tank feels like a bar of soap that can power slide, and a hover tank is wet soap. You'll constantly move in the game, because you have to chase down weapon upgrades scattered across the battlefield - an annoying feature made more annoying by the dissatisfying feel of the game's vehicles.

The game's single player is entertaining for a bit, but it's severely hampered by a lack of variety and depth. The levels are repetitive, and recycle a few enemy types with nearly identical attacks. By the eleventh level, when the game sends you up against the giant spiders from level one, but this time they're black, the repetitiveness becomes apparent. This might be fun if the game presented you with interesting environments to fight the monsters in. Instead, TANK! TANK! TANK loads up what appear to be huge worlds and then forces you into cramped artificial boundaries. It's exciting to zoom along in your wheeled minitank, but you're not going to do so for more than five seconds before you hit a black and yellow striped wall.

As you progress, you unlock a truly impressive gallery of tanks with a variety of weapons. When you use each tank, it levels up and gains upgrades. The problem is, each tank is really one of four different types, and there are only about twelve different weapons - they just use different skins and animations. It's a thinly veiled, shallow advancement - especially when you discover that you have to replay previous levels with newly unlocked tanks to unlock both new tanks and new levels. You'd think that this might be alleviated by the addition of a friend through co-op, but the second player has no ability to choose any of the vast tank gallery; they're relegated to a single tank with a single set of weapons. It's like the co-op was tacked on at the last moment.

Multiplayer, then, is the sole highlight of TANK! TANK! TANK!. It's light and simple, anyone can understand exactly what to do the moment they pick up a controller because of the simple control scheme. Sadly, its value rapidly diminishes due to the game's lack of depth, and total lack of online multiplayer. The game comes with typical Deathmatch, Team Deathmatch, and Players vs. Monsters modes - which share all of the problems of the regular game, but are noticeably more fun for the addition of more players. Watching your friend get devoured by a giant dragon is enough to make you forget that you've only got one weapon, and need to chase down limited upgrades to damage enemies. The Players vs. Monsters mode is good principally because it doesn't force you to engage in meaningless grind to see the game's later enemies - but like co-op, nobody gets to play with the huge gallery of unlockable tanks.

The game's unique multiplayer feature is My Kong mode, where one player uses the GamePad camera to paste their face across a thirty-story robot gorilla and proceeds to smash the other players' tanks into pieces. The gorilla has a variety of abilities, to contrast the tanks' single one, and can even go into a rage mode, bend over, and fire lasers from its posterior. It's really entertaining, challenging to win, and causes a lot of laughter.

Bottom Line: At its heart, this is a bad port of an average arcade game from 2009. While the multiplayer occasionally delights, the rest of the experience feels unfinished. The single player is a meaningless grind with little to offer aside from a skeletal story. TANK! TANK! TANK! might have served as a passable downloadable title, but as a full retail game it's one of the Wii U's worst launch titles.

Recommendation: Simply put, TANK! TANK! TANK! isn't worth a buy at all. If you and your friends are into silly action shooters, then give this a rental for game night, enjoy taking goofy pictures of yourself, and never play it again. You'll have gotten the full experience.