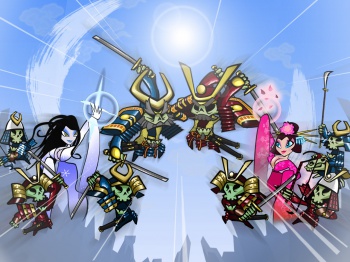 It sucks when your character dies in a videogame, but it sucks even more when it happens during the opening cinematic. Mustachioed General Akamoto, a warlord in feudal Japan, barely has time to celebrate his latest bloody victory before he finds a sword through his chest. Not letting a silly little thing like death stop his glorious endeavor, Akamoto sets his undead sights on conquering the entirety of the Japanese afterlife with a horde of zombie soldiers at his back. So begins Skulls of the Shogun, a turn-based strategy title for Xbox 360 and other Microsoft platforms. If you share General Akamoto's desire to test your tactical knowledge in a tongue-in-cheek Japanese spirit world, Skulls of the Shogun delivers solid strategic gameplay with a few laughs for good measure.

Skulls is all about style. A bright, cartoony aesthetic helps to underscore a charming script with a good sense of humor. Akamoto's ghoulish, skull-faced troops elicit more laughs than scares, as they march their way through the verdant mountains and sparkling pagodas of the afterlife. Grinning skeletal horses, vulpine monks, and preposterously bosomed women inhabit Akamoto's quirky little world, all decked out in cheerful, rich colors. A jazzy soundtrack overlaid with Japanese strings and flutes also fits the game's tone far better than military marches or period music.

Of course, a general can't get ahead on good looks and pretty music alone. When it comes time to put enemy spirits to the sword, Akamoto has quite a few options. Each mission begins with a small cadre of units under your control, which usually includes the good general himself as well as defensive infantry, quick cavalry, and far-reaching archers. The victory conditions vary for each scenario, but there's nothing too outrageous: Defeat all enemies, take down a rival general, or fight your way to a certain point on the map. You can claim rice paddies to harvest resources and haunt various shrines to produce new units. The unit types, mission objectives, and resource management are bog-standard for the turn-based strategy genre, although they all fit together well enough.

Once combat gets underway, Skulls becomes considerably more interesting. While there are only three basic units - infantry, cavalry, and archers - this helps keep battles focused on tactics rather than army composition. Each turn, you'll issue six orders to your units, who can move anywhere within a certain range, but attack only once (with the exception of Akamoto himself, whose extra sword confers one more attack). Infantry can form strong defensive lines, cavalry excel at hit-and-run attacks, and archers can wreak havoc on melee units without provoking a counterattack. A selection of monks, whose talents range from healing units to raining lightning on foes, round out Akamoto's forces, although their availability varies from stage to stage.