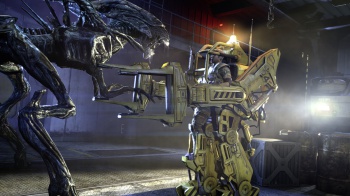 When it comes to actually completing objectives and fighting through hordes of Xenomorphs, Colonial Marines offers a good bit of challenge. In fact, in some areas it's downright brutal. Enemies will pour out of air vents, holes in the floors and ceiling, and just about every other nook and cranny imaginable. The barely-lit environments help create a claustrophobic atmosphere that builds the suspense further, and some particularly intense sequences manage to capture the feel of the franchise very well, though these are few and far between.

When it comes to capturing the creepy visual aesthetic of the franchise, each new area is like a coin flip. In some spaces - the alien structures in particular - the game looks great, while elsewhere you'll cringe at blocky, barely legible text on walls, crates, and blurry computer screens. NPCs will clip into each other, disappear and reappear, and get stuck in goofy animations.

But while the visuals are a decidedly mixed bag, the audio stands tall throughout the entire affair. Iconic music, perfectly replicated weapon sounds, and the grunts and screams of the Xenomorphs are sometimes the only thing holding the experience together. The orchestral tunes hit a fever pitch during tense moments, and it often feels like the music is built around your own actions, rather than being simply a pre-made soundtrack. It's absolutely wonderful.


Once you best the 6-8 hour campaign - and suffer through an absolute butchering of some long-held Aliens narrative themes - it's time to try out the surprisingly solid multiplayer modes. While the head-to-head options will likely be an afterthought for many franchise faithful, the online throwdowns actually manage to capture the Aliens feel better than the campaign itself. Several modes are available, including team deathmatch and objective-based game modes. Marines can outfit their arsenal with weapons unlocked in the single player and online modes, while the alien players can choose between several species variants, each with its own speciality.


When playing as the Xenomorphs, you are given a built-in radar sense that shows you where the Marines are located, allowing you to plan your attack. This is offset by the uber-powerful weaponry held by the soldiers, which can oftentimes kill an alien player in just one or two shots. There is also a robust customization suite for the Xenomorph classes, allowing you to outfit your character with different aesthetic touches as well as special abilities.

As a Marine, you are given very little to aid you aside from your firearm of choice and the iconic motion sensor. Knowing the enemy team is scurrying around in the darkness and watching your every move definitely creates a sense of anxiety that the story mode lacks, and when an alien grabs you from behind and executes you in an instant, it's hard not to jump a bit. Thankfully, all of the multiplayer modes allow you to play as both the Marines and the Xenomorphs, so you'll get to experience both perspectives every single time you hop online.

Bottom Line: Aliens: Colonial Marines isn't the Aliens game we've all dreamed of. Instead of wowing the player with jumps and scares at every turn, the game's most memorable trait is how often it manages to fall short of greatness.

Recommendation: As the game is now part of the franchise canon, Aliens fans will want to play it simply because it exists. Ultimately, anyone with a respectable knowledge of the series will be left confused by some absurd continuity errors, and the alteration of one particularly popular character's personal storyline. If you're a shooter fan with only a passing interest in Aliens lore, don't bother.