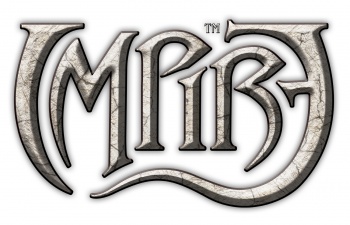 Impire is a game that makes you desperately want to like it. Its dark wit seduces you into believing in a return to the glory days of dungeon management, but sadly the enormous volume of technical problems that rain down upon you while attempting to play the game keep it from ever being able to deliver on that promise.

You'll begin the game as Baal, a demon summoned from Hell by a magician with an incredibly inflated sense of self worth. Your caster friend is a little less skilled than he thinks, so you discover to your horror that you've traded in your titanic stature and wreath of flame for the less imposing beer gut and bat wing combo. Feeling limited by your miniscule physique, you enter into a pact of sorts with the magician, agreeing to help him while you recover your strength and regain your former glory. In an unsurprising turn of events, helping him involves killing everyone he dislikes.

After that tenuous justification for your pillage and plunder is out of the way, you'll need to raise an army to smite your foes. Since even minions have to live somewhere, homemaking will always be your first and most essential task. At the beginning of each level you'll start with a large, mostly undeveloped hunk of land to work with. Your main view of the dungeon is overhead, allowing you to take inventory of which 3D blocks you'd like to have cleared away and then built into rooms. Although you can select the type of rooms you'd like to build, varying from treasuries to training rooms, you can't customize their dimensions and are instead limited to rotating the intended room around in 90 degree increments. The controls for moving your camera around the area are very finicky, and even the slightest movement can send you spiraling off desperately into the dark abyss of the map's fringe.

Once you've managed to cobble together a haven of sorts, you'll be ready to start slaying the innocent. Defeating the various heroes wandering into your domain or living nearby will gain you experience and wealth, allowing you to train up both yourself and your vicious horde. As you conquer new enemies and drag their corpses back to your dungeon, you'll gain the ability to spawn your own creatures of that type. They vary quite typically from straight up meat shields to ranged scouts and spell casters. You can assemble these troops into squads of four, instructing them to hang out, patrol your territory or to escort you around. As squad members die you'll have to rotate new ones in, so it's always in your best interest to have a stockpile of soldiers ready to replenish your ranks during a fight. Battles are fairly simple, as each type of combatant has a very specific way of engaging enemies. Really, the most difficult part is visually making sense of the mayhem as a cluster of tiny, barely distinguishable sprites all climb atop one another in the dark, like ants swarming a half-eaten sandwich.

You'll be lucky to even get to that point, though, as the most ungodly part of this game is the amount of time it takes to load up. Impire is so thoroughly filled with bugs that it's nearly impossible to play. Text, people and entire game saves will vanish before your eyes. Hopefully you're the kind of player that is compulsive about your saving, since the game only updates your progress at the end of each level. If you haven't remembered to save on your own, you'll be in for a very nasty surprise when the program whimsically force quits, and it will. The quality of your hardware isn't going to matter much since you'll be fortunate to even get Impire to start, much less play for an entire session. Even the first major patch, which was supposed to fix the UI and make the game more stable, instead only seemed to make matters worse. A game that barely launches isn't exactly the kind of Hell most people enjoy being lord of.

Bottom Line: A game you desperately want to like, but never quite manage to, given the heaping portions of frustration you're served at every turn.

Recommendation: Dungeon Keeper 2 is available on Gog.com for $5.99.