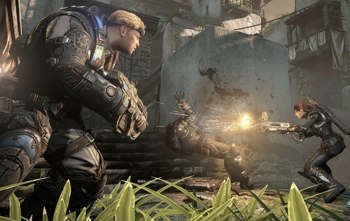 If I had played Gears of War: Judgment in 2007, I'd probably be spending the majority of this review swooning over the gritty, ultra-detailed graphics, Hollywood-quality voice acting, and fantastic cover-based shooting mechanics. And while all those points remain valid in 2013, we've also had three full-length Gears of War adventures that have accomplished all of these bullet points already. On its own, Judgment is a high quality title that offers fast-paced shooting in a four-player co-op environment, along with a robust online multiplayer suite. But when compared to the three Gears titles many gamers already have on their shelves, it simply doesn't do enough to set itself apart.

Set several years before the events of the original Gears of War, Judgment focuses on a military inquiry into the actions of Kilo Squad, led by the cocky and careless Damon Baird. The wealthy residential area of Halvo Bay is under attack by the locust horde and, in the days prior, your crew promptly put its life on the line to aid in the war effort.

The four members of the group - which includes stalwarts Baird and Cole, as well as newbies Sofia Hendricks and Garron Paduk - each provide testimony during the impromptu trial. As each member of Kilo recalls the recent events, you're tossed into that squad member's shoes, effectively splitting the game into four chapters. This plot structure is a bit flimsy, but will manage to pique your curiosity just enough to keep you pushing through until the end.

The quest is further divided into sections as the debriefing progresses. Each of these sections can be approached in two different manners: Either a straightforward, basic explanation of events which typically plays out with standard firefights, or a "Declassified" version which usually includes a specific restriction that makes that particular fight a wee bit tougher. The declassified iterations include things like limited health or weapons, or even set time limits to push you through each level faster than normal.

The entire game, both in campaign and multiplayer, is governed by a leveling system. You gain stars by performing things like head shots or explosive kills, and these stars add to your progress. Leveling up lets you unlock items for use in multiplayer like weapon skins and additional characters, but beyond that, this overarching XP mechanic does little more than serve as bragging rights with your co-op buddies.

For the first few hours of the game, this fast-paced, no-nonsense approach feels satisfying, but you'll soon realize that the payoff you normally expect at the end of a particularly difficult section just isn't there. Where in previous Gears titles you'd usually cap off an objective with an epic boss battle or major story point, Judgment simply doesn't offer this type of satisfaction.

Instead, you'll occasionally be asked to hold down a particular area with your squad as enemies pour in from all angles, which amounts to a slightly abbreviated version of the series' popular "Horde" mode. These brief moments of frantic gunplay are enjoyable in their own way, but the lack of unique enemies or boss characters leaves them feeling extremely repetitive after the first half dozen or so. Being able to take on a building-sized boss with three friends would have been extremely satisfying if offered on a consistent basis. You do eventually get to take on such an enemy, but unfortunately your first boss battle will also be your last.

The members of Kilo Squad are likewise cookie cutters of one another when in combat. Getting to play as each of the rough-and-tumble badasses would have been much more satisfying if each character brought something unique to the table. Cutscenes and high quality voice acting do help bring some color to the otherwise blank soldiers in your team, but once the bullets start flying those pleasant quirks quickly disappear.