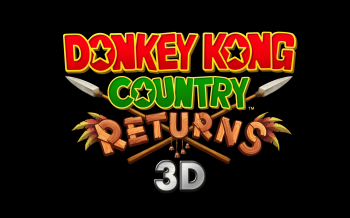 When Donkey Kong Country Returns launched on the Wii, it won praise from critics and fans alike for its fun and challenging re-visitation of the long dormant franchise. Now, Donkey Kong Country Returns 3D aims to do the same for the 3DS. A near direct port of the 2010 Wii game, Returns 3D delivers an experience that is equivalent, if not better than the one offered by the original version.

You play as Donkey Kong on a quest to retrieve stolen bananas from magical baddies that have turned the wildlife of your island home against you. With your pal Diddy Kong in tow (or controlled by a friend in local co-op), you'll run, jump and chuck barrels at your foes as you work through worlds and levels that closely replicates the gameplay that made Donkey Kong Country a classic on the SNES.

From start to finish Returns 3D offers some of the best platforming gameplay videogames have delivered in years. It excels at introducing new mechanics in simple ways and then building on them gradually to form complex obstacles that are still easy to grasp. One level might teach you that certain special textures can be gripped and climbed across, then a few stages down the road will introduce moving platforms that require that ability to proceed.

There are some levels that work better than others. The mine cart and rocket stages, which you'll usually encounter once or twice per world, tend to rely on reflex as opposed to the patience and skill of the platforming levels. Often, a single wrong move is enough to kill you in these stages and it can get frustrating when you find yourself failing repeatedly to make it past an insta-kill obstacle.

While many will likely enjoy reliving their experience from the Wii game, one problem Returns 3D faces is the fact that many franchise fans may not be willing to buy the same game twice. Returns 3D has some cards up its sleeve to attract veterans of the original. If you didn't like the arguably awkward motion controls, for instance, those are completely gone. The 3DS offers control schemes based around its analog nub and the D-Pad that you can switch between at will. Likewise, the visuals get a significant boost from the move to 3DS. The already colorful and vibrant environments are given some nifty depth by the 3D screen. It's a game that makes genuinely good use of one the 3DS's most unique features.

Returns 3D also boasts new and exclusive content, including eight new unlockable levels, each themed after one of the main game's various worlds. Unlocking them can be a tall order, requiring a lot item collection, but they're a nice treat for returning players. Designed with newer players in mind is the optional "New Mode" which is, essentially, an easier version of the original game. Playing in New Mode, you'll start each level with three hearts instead of two (it jumps to six when you get Diddy) and have access to new items that can make parts of the game significantly easier.

New Mode comes with the side effect of sometimes making things too easy. Donkey Kong Country Returns 3D is a difficult game, to be sure. That said, it's also a fair game. It will kill you where it can but it will rarely ever cheat you. The advantages offered by New Mode can at times break the well balanced challenge offered by the original game. The extra health especially can make it possible to simply charge through obstacles that otherwise might have demanded practice and technique to surpass. This isn't to say that New Mode is pointless, or even a cakewalk. You'll still encounter tough moments despite the easier experience. That said, it's more likely to appeal to more casual players still developing their skills than it is to veterans kings of Kong.

Recommendation: While much of the 3DS exclusive content is tailored toward making Donkey Kong Country Returns 3D more player friendly, the experience overall is well worth it for newcomers and veterans of the Wii game alike.