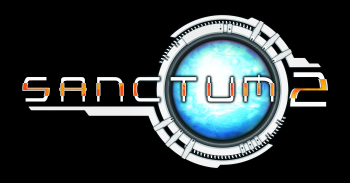 Sanctum 2 blends the strategic challenge of tower defense with the twitch reflexes of an FPS, and it does so masterfully. It's hard to call the game novel, - it is a sequel after all - but the series is definitely an innovation in the field, and Sanctum 2 even incorporates elements of RPGs with the all-new character leveling system. Sanctum 2 is an all-around good time, with only minor faults keeping it from being the perfect experience.

Sanctum 2 is a relatively simple game with a similarly straightforward storyline. Your team of soldiers must protect your base - more specifically the Core - from alien assault. Why the aliens are attacking is never really made clear, nor is it obvious what, exactly, the Core does that makes it so invaluable. Though the premise is fairly shallow, the story of your crew is told cleverly with comic strips between stages. As you move from one stage to the next, these strips will give you the gist of what's going on at that moment, but it tells you little else that might give context to the situation at hand. That, the exciting, fast-paced gameplay more than makes up for the lacking story.


At the beginning of each level, you'll get to choose which of four characters you're going to play. Each character has their own primary weapon and special ability, such as SiMo the robotic sniper, wielding its trusty rifle, and having an inherent bonus to accuracy. As you play missions, you'll gain experience, which applies to you as a player, rather than a single character, meaning that you don't have to level up each character individually. As you level up, you'll gain access to new secondary weapons, tower types, and perks, as well as unlock additional tower and perk slots, which allow you to equip multiple types of towers and perks for the mission at hand. You'll get experience even when you fail a mission, so even when you're stuck, there is the important sense of progress, which keeps the game from being too frustrating on the harder levels.


Once you've selected your character and chosen their weapons, towers, and perks, you'll be thrown into the map near the Core that you're attempting to protect. You'll have to go pick up the building materials that drop from the sky at the beginning of each build phase, which will give you a number of walls which you'll place on the ground to guide the path of the enemies, as well as an allotment of tower resources, which you'll need to build the towers themselves. You'll usually have unlimited time to plan and build your defenses, but occasionally there is a timer to keep you on your toes. This adds a bit of excitement to the build phases, but can occasionally be an annoyance in those instances where you were hoping to use the timed build phase for an overhaul of your defense system.

Using your walls and the path indicator, which tells you what route the enemies will run, you'll create something of a maze for the bad guys to run through, ideally creating labyrinthine paths that offer your towers as much face time with the enemies as possible. Creating choke points for the baddies, lining it with towers, then triggering the next wave and watching the mayhem is immensely satisfying, especially if you've done well enough that you can sit back and enjoy the show without having to dive into the action yourself to clean up the stragglers.