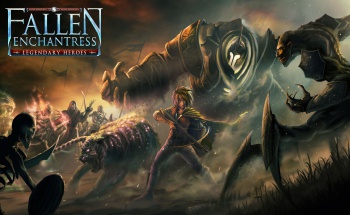 Once upon a time, there was a game called Elemental: War of Magic from the PC development house of Stardock. War of Magic was set on the troubled world of Elemental imagined by CEO Bradley Wardell, and it was a shitty strategy RPG hybrid. It was virtually unplayable due to technical issues and the user interface was as esoteric as the magic the playable rulers wielded. There were a few decent ideas though, and Stardock doubled down on them by hiring new designers to clean up the mess. In 2012, Stardock released the standalone expansion Fallen Enchantress and it was an eminently playable revision of the War of Magic engine. Stardock's latest expansion, called Fallen Enchantress: Legendary Heroes, further refines all that came before it and the result is - finally - a fantasy-themed turn-based strategy game you can devote hours to without even knowing it.

But enough real-world history, let's focus on how you forge the fictional history of your realm in Legendary Heroes. You start by choosing from a pool of pre-made rulers from the story of Elemental, or by creating your own with the robust customization options. Your ruler isn't just a faction leader, he's a unit on the board able to cast spells and engage in the tactical turn-based battles. Once you are plunged into the game world, you have to balance exploring your surroundings, beating up monsters, building your cities up and researching technologies in the three trees of warfare, magic and civilization.

What's different - and much improved, honestly - in Legendary Heroes is how you recruit the hero units that support your troops. These heroes have traits and abilities similar to your leader, and can sway the battles pretty much singlehandedly after you've them leveled up a bit. In previous versions, you found these heroes on the map and paid gold to get them on your side, but that mechanic forced players to explore in order to succeed and put too much of an advantage on the random map placement of these heroes. There's a new resource in Legendary Heroes called fame, which you earn by clearing out monsters and completing quests, but also by building monuments and grand structures like the Adventurer's Guild. After you earn enough fame, a dialogue box pops up with two different heroes you can choose to join your forces. The new system still rewards exploration, but players who enjoy building up slowly aren't hamstrung either.

How your leader and your heroes improve has become a lot more fun, too. After gaining a level, you can choose from one of five archetypes for your champion: assassin, defender, commander, mage, and warrior. This opens up a skill tree that lets you improve your hero and is a lot more satisfying than the semi-random pool of skills you'd get in previous versions. Even within the trees, there's a good amount of specialization available - a warrior can concentrate on axe skills, while another can focus on improving his swordplay. I was able to kit out a pretty devastating mage as my faction leader with tons of direct damage spells, and paired him with a general with tons of commander traits which buffed the whole army and give a unit an extra action once per battle. Elemental was mine!