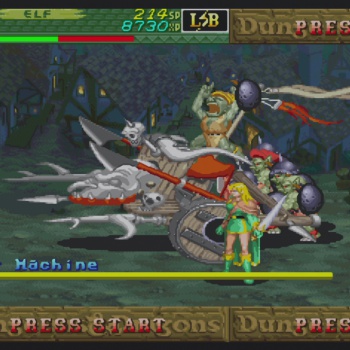 Chronicles of Mystara is actually two older titles collected in a single package: 1993's Dungeons & Dragons: Tower of Doom and 1996's Dungeons & Dragons: Shadow Over Mystara. Capcom has rolled out the now-familiar suite of upgrades for these titles that preserve gameplay fundamentals, while still offering new and varied ways to enjoy two arcade classics that most people forgot about years ago.

Aesthetically, this is the best work Capcom has ever done. Chronicles of Mystara offers your standard three image filtering options (none, sharp and smooth), and each is surprisingly attractive. The original image in all of its pixelated glory will always have that retro appeal inherent to 2D sprite-based arcade games, but more impressive is how fantastic the "sharp" and "smooth" options look, both in still images and during gameplay. Darkstalkers Resurrection looks impressive, but Chronicles of Mystara makes it look antiquated by comparison. Unfortunately, that's a difficult point to prove in text, so you're going to have trust that the screenshots attached to this review are less attractive than the game in action.

Gameplay-wise, both Tower of Doom and Shadow Over Mystara are the same old classics you (or your older brother) fell in love with in some smoky arcade circa the Clinton administration. If you haven't ever played these games, imagine Final Fight (or Streets of Rage, or the 1989 Ninja Turtles arcade game) but instead of punching barrels to discover weaponry and inexplicably tasty poultry, you'll find yourself stabbing skeletons and firing magic missiles at bugbears. Standard attacks are complemented by offensive items, spells and even special moves, and each of the characters in either title has a unique playstyle. The Cleric for instance, is a ponderous spell caster who also excels at smashing stuff with his mace, while the Thief is a nimble fighter who sprints around the screen stabbing dudes. This variety offers a huge amount of replayability - a particularly large positive for the game, as either Tower of Doom or Shadow Over Mystara can be completed in half an hour. Overall, these D&D titles feature a far more complicated gameplay system than prior beat 'em ups, but Capcom does an admirable job of ensuring that gameplay is always intuitive, and the D&D-sourced setting is as engaging here as it's ever been in pen and paper form.

The one big gameplay improvement Chronicles of Mystara includes is simply that it offers players more buttons. The original arcade version of Shadow of Mystara always felt as if it was designed with one button too few, but on modern gaming platforms that just isn't an issue. Not only do our current gamepads have more than enough buttons to accommodate every action in these D&D titles, Capcom was also kind enough to offer full controller customization options. As a result, the two games in this package have never been more accessible. Though it's sacrilege to question the purity of using a legitimate arcade stick for what should be an "arcade" game, but it really is far more comfortable to play these titles using a modern gamepad than it ever was to pound the buttons on an arcade cabinet.

If that last sentence gave you an arcade purist's nosebleed, don't worry: Chronicles of Mystara is 100-percent compatible with almost any modern fighting game stick, so if you really need that classic experience, you can crank up the scanlines, set the game to mimic a CRT monitor, plug in your stick and stab goblins until your hands are blistered. In this form, it would be easy to consider Chronicles of Mystara to be "arcade perfect." It isn't exactly, but when you consider that these new iterations feature online multiplayer, a huge list of unlockables and absolutely no need to insert quarters when you die, the overall experience surpasses that found in the arcades of the late 90s.

Most crucially though, the original games never offered a "House Rules" option. This is the second major addition to Chronicles of Mystara: A series of unlockable toggles that change fundamental aspects of how these games function. Tired of your magical weapons breaking after only a few attacks? Turn that off. Want to regenerate health every time you kill some jerk? There's an option for that. The only real element missing from Chronicles of Mystara is the option to upload gameplay footage directly to YouTube from within the game itself. Darkstalkers Resurrection offered as much, and while it makes less sense to include in a game that isn't inherently broken up into brief rounds of combat, it still would have been nice to have the option.

The only real problem with Chronicles of Mystara is that Capcom seems to be running out of new ways to improve its older titles. With each successive remake its introduced over the past few years Capcom has always added one big new addition that clearly set the newer efforts apart from their predecessors. That's not really the case with Chronicles of Mystara. It's absolutely a fantastic remake, and should be a mandatory purchase for any D&D geeks or fans of Final Fight-style beat 'em ups, but where does Capcom go from here? Fingers crossed for a next-gen Quiz & Dragons.

Recommendation: If you're old enough to have played these games in the arcades, you already know you should own this game. If not, well, now you know.