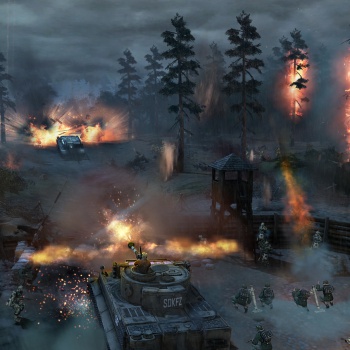 When the original Company of Heroes came out in 2006, it changed a lot of gamer's perceptions of what "real-time strategy" meant. You don't have to put resource-collecting units on the map? That's crazy talk! Of course, COH was incredibly successful precisely because it broke the norm. In contrast, the long-awaited sequel doesn't alter much from its predecessor's formula, and that's why COH2 delivers an amazingly fun experience. It just won't blow your mind.

Set on the Eastern front of World War II, you'll play as either the Russians or the Germans. Play is squad-based and tactical. You move groups of troops around the battlefields which vary from fields and farmhouses to bombed-out urban ruins. All the combat happens automatically, with shots being fired almost continuously. Cover is essential, and you'll find yourself moving troops between sandbag walls and into buildings just to survive. Specialized units like engineers - able to plant mines, explosives or construct buildings - and shock troops - grenadiers, essentially - are valuable, and the micromanagement of merging untrained conscripts into these units once casualties are suffered will occupy most of your time. The fun of COH2 comes from using position and cover to your advantage, and in this way it felt true to how I imagine small arms combat was during the period.

The campaign is framed around a Russian lieutenant reliving the war through an interview with his former commanding officer. In between the missions, there's some cutscenes with decent acting, and I enjoyed that most of them were extremely short, teasing you with a brief introduction before getting you back into the action of commanding troops. One thing's for sure, the Russian front was an incredibly bleak place in 1941, and the narrative of COH2 underlines it with Russian soldiers shot for retreating or disobeying orders. It's cool to see history come to life in game mechanics with the harsh winters killing Germans and Russians alike, and Order 227 taking out your units if they pull back to the base when a party officer is looking. If you don't like dark war stories, you may miss the more heroically portrayed Western Front of COH.

In both the 14-mission single-player campaign and in multiplayer skirmishes, you need to build up your base to get the best units. You can only get tanks, half-tracks and other vehicles once you build the requisite structures, but these cost a lot of fuel, munitions and manpower - the three resources in COH2. Resources are earned by holding points on the map, and this design forces the player to orchestrate a delicate balance between aggressive tactical maneuvers to take and hold territory and waiting for more powerful vehicles. It's not easy, but when you successfully hold off a tank attack with some well-placed grenades and immediately counter-attack with the armor you just built to turn the tide - well, these are the best moments of COH2.