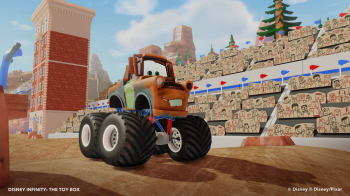 Add an interface that, while simple enough for players of all ages to simply pick up and create, doesn't present the information well. A catalog of 1,000 objects can become unmanageable when presented only as icons that you must flip through one page at a time. The lack of cataloging and sorting means you'll spend more time looking for the object you need instead of building. Finally, players who find sandbox world-building central to the game's fun will immediately be frustrated by the need to play through all the other content in order to collect the tools you need to build. A majority of the objects are awarded through a mechanic reminiscent to slot machines, using a currency earned in Play Sets and Adventures for a new item awarded at random. Despite these issues, you will find yourself spending countless hours arranging and rearranging the toys in your virtual playroom.

Where Adventures are basically just glorified mini-games, Play Sets are story-driven adventures in structured worlds, each with roughly 4 hours of single-character story line to play. The starter set comes with Monsters University, Pirates of the Caribbean and The Incredibles, each offering a unique experience. You can live through Sully's freshman orientation at Monsters University, as you perfect your monster scare tactics through stealth adventures around campus, preparing yourself for the ultimate college rival showdown - an assault on Fear Tech's home turf. When sneak attacks become too slow paced, jump into Pirate of the Caribean's swashbuckling adventure and hack, slash, and canon fire your way through a dark, ship filled world as Captain Jack Sparrow.

While the design and function of Play Sets feel almost flawless, they depart from the magical trans-franchise nature of the Toy Box by only allowing play with characters from within the Play Set's franchise, a limitation which feels out of place. And since every player needs an associated figurine to get in the game, the starter pack is Play Set co-op compatible with its figurine assortment. It's a notable step back from the endless world that's the corner stone of Infinity's bragging rights, especially when you find yourself wondering how the swashbuckling swagger of Jack Sparrow would handle an Omnidroid battle royale in the midst of The Incredibles' modern day Metroville cityscape.

Content aside, the Play Sets and Adventures do a great job of giving you ideas - and the tools to execute those ideas - about what you can create in the your Toy Box. The Toy Box presents players a blank canvas and seemingly unlimited creative potential, with an approachable set of tools and objects that are easy to use.

Had a blast in the Cars themed racing adventure? Head back to the Toy Box and create your own ultimate racetrack through Sleeping Beauty's castle before dipping into the Cave of Wonders toward a treasure filled finish line. Prefer the FPS experience of Sully's paintball shootout? Create an FPS of your own between the maze-like shrubs of Alice's dark Wonderland. Feeling social? Trick out your own Pride Rock into party central with dynamically activated boom boxes and firework machines, and invite your friends to join you in your amalgamated Disney's tinted outdoor club. This is where Disney Infinity shines the brightest.

Bottom Line: Even with its few missteps, Disney Infinity is a magical experience that succeeds in immersing adults and children alike in a robust universe where you will spend countless hours making your childhood dreams into videogame reality.

Recommendation: Disney Infinity is a must-have game for gamer families with children of all ages and those who love the Disney fantasy universe.

This review is based the Xbox 360 version.