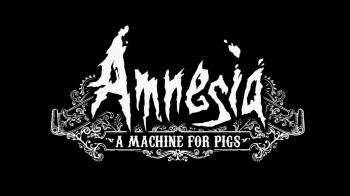 Oh, you men of vision and ambition, purveyors of a new world, a brighter future and a better day for all humanity. You tempt us with succor but scald us with iniquity; glorious deception is your stock in trade! Rather like Amnesia: A Machine For Pigs, you might say, which despite its promise of a new and twisted descent into horror, fails to deliver anything more than a few startle-scares and a story that starts with promise but ultimate succumbs to incomprehensibility.

Oswald Mandus is a man of vision, ambition and means as well, and also the father of two young boys, Edwin and Enoch, who have gone missing. Awakening to their disappearance and no memory of anything else, he is told by a mysterious benefactor that they are trapped in the machinery below. But what is this machinery? Who built it, and what is its purpose? Mandus cannot remember. He knows only that his children need him, and he will do anything - anything - to protect them.

The best horror games - the best horror in any medium, really - play with your mind. They build you up, turning the key and tightening the spring with every step, letting your imagination do the heavy lifting. A Machine For Pigs gets that formula half right, building to a crescendo that never really materializes. It's a remarkably empty world, and the tension driven by the thought that something awful could happen at any moment eventually gives way to tedium because it just never does, and while the first startle-scare is a good one, it doesn't actually lead anywhere. The haunting scream fades away, and Mandus does nothing.

You will eventually encounter the denizens of the machine, but it's very much an anti-climax when you do. For one thing, they're basically pigs; mutant dire pigs, perhaps, but pigs nonetheless. Their more intimidating two-legged brethren, meanwhile, are presumably more dangerous but may well appear even less frightening for a certain subset of oldsters because of their resemblance to the pigs in Duke Nukem 3D. No, seriously.

But the real problem with A Machine For Pigs is a simple change in mechanics that fundamentally alters the gameplay and, in the process, the balance of power. Daniel, the player's avatar in Amnesia: The Dark Descent, was afraid of the dark, afraid of monsters and afraid of the horrific events happening around him; and while the sanity mechanic was contrived, it forced the player to work within the limits of his delicate and profoundly damaged psyche. Mandus, however, has no such fear. He moves in the dark like a shadow and can remain perfectly still and silent as mutilated, murderous enemies shuffle by; he has no compunctions against splashing around in fetid guts and offal, and betrays no reaction to terrible visions of his boys. He is not, as promised, a fever-wracked Victorian industrialist haunted by bizarre, dark dreams - He is a Videogame Hero.