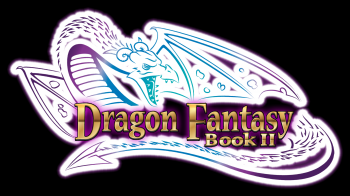 The same way that Dragon Fantasy Book I was a tribute to the 8-bit JRPGs of yesteryear, Dragon Fantasy Book II takes classic 16-Bit RPGs and blends them into a retro smoothie that entertains its target audience, though not without some caveats. Most notably, it boasts several technical problems that, sadly, drag the experience down. Despite being a game that looks as though it could have run on the SNES, its performance is dodgy at best on the PS3.

The game will regularly need to pause when you enter a new area and, whether you're in battle or just running through an environmental effect, you'll often experience slowdown when things get busy on-screen. These problems aren't made any better by the Book II's occasional bouts of buggy-ness. You can probably count on experiencing something unfortunate at some point, whether it be the game freezing or, in my case, having to fight the same boss battle twice because I stumbled back into said baddie's area and the game (assumedly) hadn't registered my first win.

These issue set aside however, Dragon Fantasy Book II is a lot of fun. When it starts off you're playing as Ogden, the returning protagonist from Book One. An over-the-hill and out of retirement knight, he starts the game woken by a psychic message from a supposed princess. From there, the game launches the player on a quest to stop a big bad from doing evil stuff. It's a plot that RPG fans have seen countless times before, but the overall goals of your quest tend to be on the peripheral of the game's attention. They're excuses for the adventure to be happening and little more.

Rather the game's focus is referencing nerd culture and gently jabbing at RPG tropes wherever it can. You won't need a honed eye to pick out allusions to H.P Lovecraft and Dr. Who, for instance. There's also no shortage of more subtle moments to reward players who invest in exploration. Overall, the tone is very clearly geared toward humor and it has fun with its RPG and geek heritage. This isn't to say the game's playfulness excuses all of the story's flaws. It could have done a better job of filling in the blanks for players who missed Book I, for instance. That said, its energy and drive to be entertaining is enough to hold its flaws at bay.

The game's combat should feel immediately familiar to anyone who's played an RPG on the Super Nintendo. No small part of this is owing to the fact that Book II basically cherry picks bits and pieces of gameplay from some of the most famous RPGs ever made. The core of its battle system is probably drawn most directly from Chrono Trigger. When you enter a dungeon you can see enemies and even avoid them at times. When you come into contact with one however, your party will enter into a turn-based battle where you'll trade attacks and skills until you or your opponents are killed.