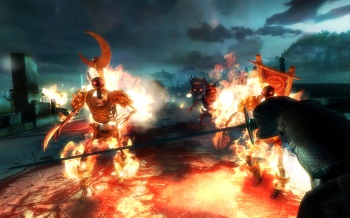 There is incentive to use the various combo moves. After most combat sequences you'll receive a rating on a scale of 1-5 shuriken and receive bonus karma based on the variety of attacks and weapons you used, and how much damage you dealt (or received). In addition, as enemies become tougher, larger, and start blocking your regular attacks with shields or clawed hands, using a well placed combo can often spell the difference between getting to the next section of the game versus restarting at the last check point.

As the game progresses, you'll also pick up a variety of ranged weapons like a heavy revolver, a machine pistol and a flamethrower, giving you much-needed ways to take on foes at a distance. You'll pick up money along your gory adventure, which you can use to outright purchase ammo for your weapons, or to upgrade their effectiveness. These range from simple damage or accuracy boosts to more outlandish upgrades, such as turning your double-barreled shotgun into a quad-barreled death machine. Unless you take the time to check out every corner, or hunt down every one of the game's secret areas (a throwback to the original Shadow Warrior), you'll almost never accumulate enough money to purchase every upgrade that's available for your armory. Depending on how much you prefer sword combat, this may not bother you much, but if you're the kind of shooter fan that loves switching from weapon to weapon in a firefight, you might find it disappointing that you can't use each gun's unique powers to full effect.

While combat is enjoyable, Shadow Warrior has a few other blemishes here and there that can pull you out of the experience. The game has a flow-breaking tendency to pause every few minutes to load the next section in a level (though thankfully it never did so in the middle of a fight), and the levels themselves, ranging from serene Japanese shrines to gritty industrial buildings, can become slightly maze-like in their design. On more than a few occasions you'll be wishing that the level designers included a few more landmarks to make them easier to navigate or at least a minimap to help you get around. You'll occasionally find yourself needlessly backtracking in the hopes that you didn't accidentally overlook something vital to your current objective or the glow of a door that leads to the next section. Plus, (in what is likely another throw back to shooters of the 90's), many of the levels send you off in a key hunt to pick up a set of padlock keys or smash a colored shrine in order to open a door elsewhere in the level. In concert with the awkwardly designed level sections, Shadow Warrior can become annoyingly repetitive during these parts, but thankfully you won't lose more than a few minutes trying to figure them out.

Bottom Line: Shadow Warrior isn't free of some design flaws that can take away from the experience, but as an action game, its combat is solidly put together. While not the easiest to use, the various weapons and sword fighting combos you have really make you feel like a badass warrior whenever you pull off a gruesome decapitation.

Recommendation: If you're nostalgic for some old school style shooter action, or are eager to try out some first-person slasher combat, Shadow Warrior's the game for you.